Radley, known as Ramon in the Japanese version, is an inhabitant of Crash Town.

Radley is the leader of one of the two gangs, the Radley Bunch, that rule the harsh town through Duels. The other gang, the Malcolm Crew, belongs to Malcolm. According to another resident, Barbara, the two of them came to form their groups as a violent way of forcing people to work in the excavation of the "Dyne" mineral used in the construction of Duel Runners. One member from Radley's group is Kalin Kessler, who Radley himself calls "Sensei".

After Yusei Fudo's Duel with Kalin concludes, Radley is confronted by Lawton, who challenges him. Lawton defeats Radley in one turn with "Gatling Ogre", and as per the rules of Crash Town, Radley is sent to the Dyne mines. It is unknown what happened to him after the town was renamed Satisfaction Town.

Most of the gang members from his group wear black capes. 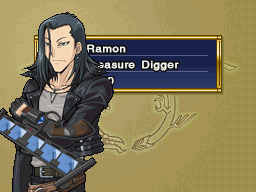 Radley, as Ramon, in Over the Nexus

Radley, referred to by his original name Ramon, appears in Yu-Gi-Oh! 5D's World Championship 2011: Over the Nexus in a role similar to his anime counterpart. The player duels against him during Chapter 5, with his arrest shortly following. After finishing the game, he can be found for rematches in the Facility.