Raid Duel - Dimensional Disaster: Buster Gundil the Cubic Behemoth! is an event in Yu-Gi-Oh! Duel Links, based on Aigami's first Duel with Seto Kaiba in Yu-Gi-Oh! The Dark Side of Dimensions. It allows the player to unlock Yugi Muto (DSOD) as a playable character. 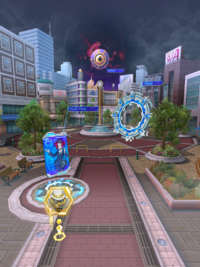 Duel World (DSOD) during the event.

Aigami can be challenged through his monster, "Buster Gundil the Cubic Behemoth", which must first be spawned in the Event page. This can be done by Dueling in the Duel World (excluding the Gate), or by Dueling in Ranked Duels, which will increase the spawn rate of the Cubic Monster, while also rewarding Traces of Aigami. After it spawns, the player can challenge it at any time in the Event page.

In Assist Duels, the player does not need to wait for the Cubic Monster to spawn.

Even if the player does not succeed in defeating Aigami, he can be challenged again by using Traces of Aigami, until its LP reach 0. 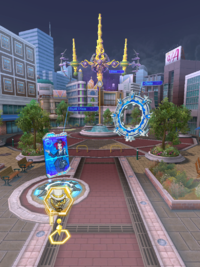 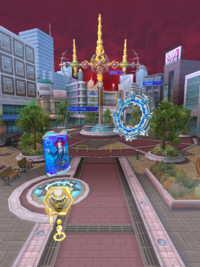 Duels against Aigami are conducted as Raid Duels. In this mode, Buster Gundil the Cubic Behemoth will spawn with a large amount of LP, but if the player does not manage to defeat it, the damage dealt during that Duel will be carried on to the next time it is challenged. The Cubic Monster also uses the Skill "Do you believe everything that you see?", which forcefully ends the Duel in a draw at the start of the opponent's turn from 10th turn onward.

Raid Duels also feature Assist Duels, in which players can help others to defeat the Cubic Monster together. Before a player enters an Assist Duel, the damage dealt by other players will be subtracted from the Cubic Monster's starting LP. After one of the participant players finishes a Duel in which the total damage dealt by all players is greater than the Cubic Monster's original LP, all players who participated are rewarded, and they become available to assist other players (if a player is in the middle of a Duel when that happens, they will only be notified after the Duel ends).

Certain monsters the player controls will deal triple battle damage to the Cubic Monster. These are related to "Blue-Eyes White Dragon" and "Dark Magician", including alternate artworks. In addition, the three Egyptian Gods will deal five times more battle damage. 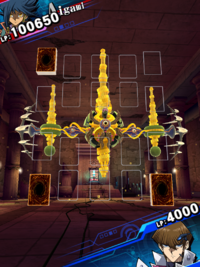 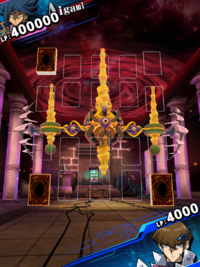 Duels against Aigami are also conducted as Dimension Duels. In this mode, both players can Dimension Summon, which allows them to Normal Summon/Set Level 5 or higher monsters without Tribute. This is not optional, and they are not treated as Tribute Summons. Monsters with a Normal Summon condition (e.g. "Obelisk the Tormentor") must still fulfill them in order to be Dimension Summoned.

After every 5 Duels, the player can challenge Aigami to a Dimension Duel EX. This can only be done when the Cubic Monster spawns, or when the player is re-challenging him in an Assist Duel in which they have already taken part of.

In this mode, the player gains a Willpower meter, which ranges from 0% to 1000%. It is increased based on the following conditions:

By using Willpower, the player can use the EX Skill "Willpower Rising". It does not replace the player's normal Skill, and can apply the following effects by removing the player's Willpower:

Defeating the Cubic Monster in a Dimension Duel EX will reward the player with 1 Rainbow Treasure Box, in addition to the other Treasure Boxes rewarded for finishing a Raid Duel.

The following items are exclusive to this event, some of which can also be purchased in the Store. 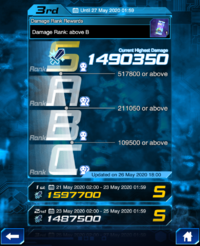 The Damage Ranking, as seen in the event. The amount below each rank represents the minimum damage necessary to reach that rank, while the sword and the person icons indicate the ranking of the player and their friends, respectively.

The player will be assigned a Damage Rank based on the highest damage they dealt to the Cubic Monster. The possible ranks are C, B, A, and S. The minimum amount of damage necessary to achieve each rank is updated hourly, and changes based on the tally. The exact method of calculating this value is unknown.

The event is divided in five periods of two days (with the exception of the last, which lasts three days intead). At the end of each period, the player's Damage Rank is reset, and if they have achieved a Rank B or higher, they will be awarded with one Legendary Duelist Rainbow Pack (DSOD).

This story takes place after the incidents from the Memories of a Friend event. During the event, once the player logs into Duel Links for the first time since the event started (or if already logged-in, once the player enters a Duel World Area, if they weren't at one already), they will be greeted by a cutscene.

From May 25, 2020 onwards, after the player completes the requirements for unlocking Yugi Muto, a new cutscene is played. Sera tells Yugi she knows how much that card meant to the Pharaoh, and he asks how she knows about that. Sera explains that she, along with other people, received the power of the Plana by her master, Shadi Shin. She then says that this power could both be used to create an utopia or destroy the world, depending on how it's used, and for that reason she had no one else to turn to, except Yugi. As the room gets brighter, she asks Yugi to save her brother, by going to Duel Links.

On May 27, 2020, a new cutscene is played. The Duel between Aigami and Kaiba continues. Aigami explains that Cubic monsters can be stacked on top of each other to give them more power, and attacks Kaiba's "Krystal Dragon" with his 3000 ATK "Buster Gundil the Cubic Behemoth", destroying it. As he prepares to finish the Duel with his next attack, he's interrupted by Kaiba's "Counter Gate", which negates the attack and allows him to draw a card, and if it is a monster, he can Summon it. However, Aigami activates "Cubic Mandala", to bring back all of Kaiba's five monsters destroyed this turn, and says that even if Kaiba does draw a monster, he will not have the space to Summon it.

On June 1, 2020, after the event ended, the last cutscene is played. Kaiba refuses to be defeated after all his effort, and manages to draw "Obelisk the Tormentor" from the Shrine of the Millennium Stone's grounds. Aigami is unable to believe how Kaiba pulled this off, as the Egyptian Gods should have vanished from this world along with the Pharaoh. Kaiba then activates the effect of "Obelisk", but Aigami responds he shouldn't be able to activate monster effects (due to the effect of "Cubic Mandala"), to which Kaiba responds "It's no monster... It's a god!", and destroys "Buster Gundil". Aigami says the Duel is not over yet, but Mokuba tells Seto that they've finished collecting all the pieces of the Millennium Puzzle, fleeing with the container in a helicopter. Aigami ends the Duel to go after him, teleporting to the container, but is shoved off and falls to the ground. Kaiba, having now collected what he needed, says "To be continued" to Aigami, and disappears in the distance. Aigami simply smirks at the situation.

Aigami uses the following Decks as a Raid Duel opponent.

Every time the player defeats the Cubic Monster, they will be awarded with Treasure Boxes of different types.