Raid Duel - Fear the Meklord Emperor! is an event in Yu-Gi-Oh! Duel Links, based on Primo's Duel with Yusei Fudo in episodes 108 to 110 of the Yu-Gi-Oh! 5D's anime. It allows the player to unlock Primo as a playable character. 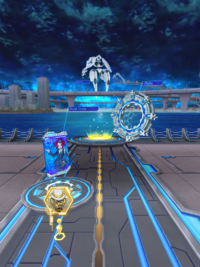 Duel World (5D's) during the event.

Meklord Emperor Wisel must first spawn in the Event page. This can be done by Dueling in the Duel World (excluding the Gate), or by Dueling in Ranked Duels, which will increase the spawn rate of the Raid Boss, while also rewarding Traces of Iliaster.

From May 22, 2021 onwards, the player can unlock Primo as a playable character by defeating the Raid Boss with at least 3,300,000 event points.

Duels against Primo are conducted as Raid Duels. In this mode, Meklord Emperor Wisel will spawn with a large amount of LP, but if the player does not manage to defeat it, the damage dealt during that Duel will be carried on to the next time it is challenged. Meklord Emperor Wisel also uses the Skill "I Will Squash You Like a Pest!", which forcefully ends the Duel in a draw at the start of the opponent's turn from 10th turn onward.

Raid Duels also feature Assist Duels, in which players can help others to defeat Meklord Emperor Wisel together. Before a player enters an Assist Duel, the damage dealt by other players will be subtracted from Meklord Emperor Wisel's starting LP. After one of the participant players finishes a Duel in which the total damage dealt by all players is greater than Meklord Emperor Wisel's original LP, all players who participated are rewarded, and they become available to assist other players (if a player is in the middle of a Duel when that happens, they will only be notified after the Duel ends).

After Dueling against Meklord Emperor Wisel 5 times, the player can challenge it again in a Turbo Duel.

In this mode, both duelists gain Speed Counters (up to a maximum of 12) by meeting the following conditions:

In addition, another Skill will automatically activate at the beginning of the player's first turn, depending on the Raid Boss' Level:

The following items are exclusive to this event.

The player will be assigned a Damage Rank based on the highest damage they dealt to Meklord Emperor Wisel. The possible ranks are C, B, A, and S. The minimum amount of damage necessary to achieve each rank is updated hourly, and changes based on the tally. The exact method of calculating this value is unknown.

Every time the player defeats Meklord Emperor Wisel, they will be awarded with Treasure Boxes of different types.

Primo has the Skill "I Will Squash You Like a Pest!" for all of his Decks.

In Turbo Duels, Primo also has the Skill "Synchro Destroyer".