From Yugipedia
Jump to: navigation, search
For other versions of this character, see Rally Dawson (disambiguation).

Rally Dawson is a character in Yu-Gi-Oh! 5D's, who is friends with Yusei Fudo.

He is marked as a thief by the Sector Security, by having a criminal mark put on his face, which allows him to be tracked. 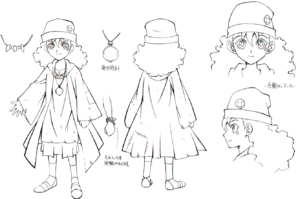 Rally along with Yusei Fudo, Jack Atlas, Blitz, Tank and Nervin lived together in Satellite. Jack left the group after having differing goals with Yusei. Rally would often fluctuate between spending time with Jack and the others. He tried to encourage Jack to rejoin their friends.

After Jack is invited to New Domino City, he ties Rally up and leaves him float in a boat off the pier, in a scheme to get Yusei's "Stardust Dragon" and Duel Runner, which were necessary to get to New Domino. Yusei saves Rally, who apologizes for the trouble.

Later Rally acquires a chip for Yusei's new Duel Runner. In the Japanese anime, his friends worry Rally might have stolen it. In the English anime, Jack planted it where Rally would find it.[1]

After giving it to Yusei, they are confronted by the Sector Security, who are looking for Rally. They tell Rally it is pointless to run, since they can track him with the signal emitted from the criminal mark, but Yusei uses his laptop to jam the signal. Yusei speeds off to distract the securities, while Rally and their friends make their escape.

Yusei clears any extra criminal record Rally obtained that day by defeating a security, Trudge, in a Duel, where the securities were to forget the events of that day, if he won.[1]

Before Yusei parts to duel Jack, Rally gives him "Turbo Booster", which was Rally's most prized card. In the dub, it was said to have belonged to his father.[2]

Rally, along with Blitz, Tank and Nervin are captured by Iliaster and held captive to force Yusei to enter the Fortune Cup. After Yusei made it to the finals, Jack ordered that they be released, saying Yusei wasn't going to run away. Rally and his friends are set free in a scrapyard with a monitor to watch the Fortune Cup final. They are surprised to see Yusei is dueling Jack and that Yusei now has a criminal mark.

Rally and the others were then hanging out at the old subway until Yusei and Crow came. Through Crow's criminal mark, Sector Security tracks all of them down and Crow tells them to go to his hideout. Although Rally and the others went to the hideout quickly, Yusei and Crow were busy dueling two Sector Security Officers. When all the kids that Crow takes care of appear, Rally gets frustrated that the kids want Yusei's autograph while Tank suggests to get the autograph so he can sell it for a price. As a result, Rally kicks Tank in the buttocks.

When Crow tells the story of the legendary man, Rally argues when Crow reaches the part about Sector Security and how how people in Satellite give up hope. When Crow tells the kids to go to bed, the kids argue that Rally, "a kid who is still in his diapers", doesn't need to.

After witnessing the battle between Kalin and Yusei, Rally and the others tried to push Yusei's Duel Runner back to Martha's house. On the way, Rally and the others encountered thugs and gave them their Deck and clothes to pay a toll. They were then tricked by an old man who was just another thug and the thugs took off with the Duel Runner. Blister, impersonating Sector Security, managed to get the Duel Runner back before discovered that Rally is completely naked.

After the events of a black smoke in Satellite, Rally vanishes, along with many others. However, later, when Yusei Duels Roman Goodwin, and the Dark Signer realizes that he's about to lose the Shadow Duel, Roman uses an evil spell to flee, and force Rally to take his place. Rally manages to play "Turbo Booster Cannon" and uses its effect to destroy "Earthbound Immortal Uru" and inflict damage to himself equal to its ATK in order to get Yusei to win the Duel. Rally then turns into dust but before he fades away he asks Yusei to protect Satellite.[3]

After Yusei's second Duel with Roman ends, he and the rest of the people from Satellite sacrificed to the Earthbound Immortals are resurrected.

He was not seen or mentioned again until episode 150 when he's seen cheering on Yusei. His last appearance is in episode 154, where he and the rest of the gang are driving a truck in Satellite. They notice Yusei and Jack driving by during their duel, Rally cheering for Yusei as he passes.

Rally assists the player character throughout the storyline with the use of a Turbo Duel Terminal. 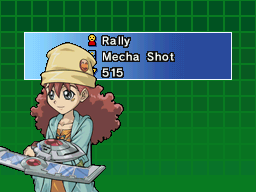 Rally appears as a supporting character and opponent in World Championship 2009: Stardust Accelerator.

In the first event of the story, Rally and the Player duel against Jaime and Syun in the semi-finals of a local tag duel tournament.

In the second event, the Player and Rally duel against Crow and Rei in the finals of the tag duel tournament.

In the third event,the Player and Rally attend the awards ceremony for winning the tournament only to have it interupted by Trudge and a Sector Security officer named Wade. To save everyone Rally challenges Trudge and Wade to a Duel with the Player as his partner.

In the end, Yusei is impressed with how strong Rally has grown.

Upon completing the story, the Player will receive three copies of "Turbo Cannon" and the photo: "Rally Dawson - Love".

Rally can also appear as an opponent in other characters' storylines.

In the third event of Satellite Yusei's story, Rally and Edith duel against the Player and Yusei.

In the third event of Trudge's story, Rally and Walter duel against the Player and Trudge.

In the first event of Dark Signer Kalin Kessler's story, Rally and Crow duel against Kalin and the Player.

In the second event of Jack's story, Rally and Carly Carmine duel against the Player and Jack.

In the third event of Carly Carmine's story, Rally and Yusei duel against the Player and Carly.

Though Rally only played a few "Turbo" cards in the anime, he is available as an opponent in a number of video games.