The name "Ran" comes from the Japanese word "ran" (らん), meaning "orchid", which is the theme of her Deck. 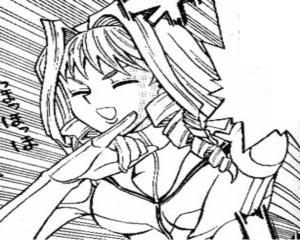 Ran in her Turbo Duel outfit. 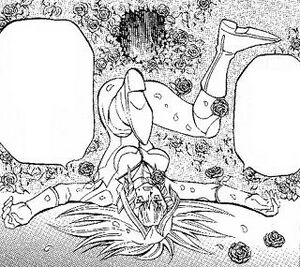 Ran faced Akiza Izinski in a Turbo Duel in the hopes of taking her title, "Queen of Queens". However Akiza won and Ran toppled off her Duel Runner into a rose bush. She says that she'll get Akiza next time and Akiza accepts the challenge.[1] Ran attended the D1 Grand Prix and watched Akiza's Duel against Sherry LeBlanc.[2] When Akiza's Turbo Duel with Kalin Kessler is about to begin, Ran is seen again alongside Akiza while they're waiting for Kalin to show up, with Ran wondering about why Akiza's opponent doesn't seen to show uo assuming he may be scared of Akiza's "Foresee Draw" ability. However, Kalin enters the scene right in the next moment, giving Akiza and Ran a sharp glare which Ran only comments her first impression of him as being a "quite dishy" one. [3] After that brief scene she's seen alongside Mei and Sakura in the audience a few panels throughout Akiza and Kalin's Turbo Duel and being shocked about the moves Kalin pulls off to block Akiza's attack and effect options in the duel. The three friends didn't lose their faith in Akiza though and kept cheering for her friend to motivate Akiza to do her best. However, Kalin's Zero Hand strategy overpowered Akiza and she lost the duel. Ran, Mei and Sakura are seen with tears in her eyes as they witnessed her friend's shocking defeat by the hands of Kalin Kessler. [4][5]

At some uncertain point during the second round of the D1 Grand Prix, while Lazar was about to defeat participating Turbo Duelists in order seal their souls into cards, Ran, Mei and Sakura fell victim to Lazar's soul stealing raid too. After Rex Goodwin's defeat in his Turbo Duel against Jack Atlas and when Crow Hogan managed to stop Lazar's actions by beating him in a Turbo Duel too, Lazar was forced to release all sealed souls which returned to their bodies once again, Ran, Mei and Sakura were seen regaining her souls alongside the other D1 duelists who's souls were sealed. [6]

Ran next appeared after Sect Ijuin and Yusei Fudo thought their final Turbo Duel to save Sect from the Darkness of the Ultimate God and interrupted this being's resurrection. Due to Yusei's victor Akiza was freed from her chain which were kept on here by the Ultimate God and Ran seemed to be happy to see Akiza is doing fine after what she'd been through. [7]