Ranran Nanahoshi (ランラン Nanahoshi Ranran) is a character in the Yu-Gi-Oh! GO RUSH!! anime. Serving as the head of the MIK headquarters, Ranran surveys the Alien Residential Area. 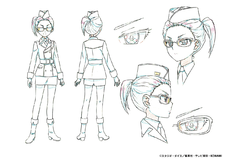 Lineart of Ranran depicting her from different angles.

Ranran closely resembles Rayne Nanahoshi from Yu-Gi-Oh! SEVENS. She is a young lady with indigo hair, wearing what appears to be a female version of the MIK uniform, consisting of a black-colored blazer that has a gold chain running through from the shoulder area to one of its buttons, and boots, with indigo-colored tights and gloves. She also dons black sunglasses and a hat as accessories to the uniform.

Ranran is ditzy and has a penchant for cute things. In professional situations, she conducts herself in an authoritative manner.

Some time after Yudias defeated Zuwijo, and Asaka Mutsuba retrieved the stolen Earthdamar, Ranran was seen with her fellow MIK members in the Alien Residential Area, having obtained a piece of the Earthdamar, discussing that Manabu should no longer be left unsupervised, before departing.

Ranran plays a Shadow Flower Deck. It employs a similar strategy of summoning multiple monsters with the same name from the Graveyard as that of Rayne's Deck.