Ray Akaba ( レイ, Akaba Rei) is a character appearing in the Yu-Gi-Oh! ARC-V anime. She is the original incarnation of Zuzu Boyle (Standard Dimension), Celina (Fusion Dimension), Rin (Synchro Dimension), and Lulu Obsidian (Xyz Dimension). She was Leo Akaba's daughter and a professional Duelist in the Original Dimension. In her father's place, Ray confronted Z-ARC, which resulted in her soul being split into four and reincarnated into four different lives. This initiated the Revival Zero project with her resurrection being its main focus. She, along with Z-ARC, is one of the true co-creators of Pendulum Summoning. 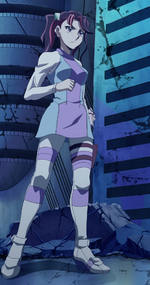 Ray's face is strikingly similar to that of her dimensional soul fragments, but Ray herself is older and taller than they are in the series. Overall, Ray shares a mix of similar traits to those of her four dimensional reincarnations. She has long, maroon and dark red hair, similar in style to Lulu Obsidian. Her hairstyle is held similarly to both Lulu and Zuzu Boyle's with hairclips. Her civilian clothes are similar to the Duel Runner Suit that Rin wears. She also wears a thigh strap, similar to Celina's Duel Academy uniform. When she was first shown on the TV screen in her father's laboratory, her Duelist profile picture showed her wearing pink sunglasses or goggles.

After her division, she appears on occasion as an immaterial spirit of pale yellow energy with only vague outlines of her features. The shading of her body is smoothed out in the dub to remove references to nudity.

Ray's desire to stop her father from being wiped out in his attempt to stop Z-ARC is what caused her to step up in his place to stop his crazed ambitions. She was also shown to care very deeply for her father, as well as the Duel Monsters' thoughts during the destruction.

According to her father, Celina acted exactly like Ray did when she was younger, showing that she has always been a very willful individual. Considering all four of her reincarnations are pieces of herself, she presumably possesses other traits the girls possess or have in common.

Though it is not explicitly confirmed, Ray appears to be capable of communicating with Duel Monster Spirits, as she was able to sense the anger of the Four Dimensional Dragons. In the dub, this may have extended to Z-ARC (though she was possibly simply being perceptive).

Ray's last name, Akaba, means "red horse", Ray's name spelled in Katakana can mean zero, the name derivation from which the Revival Zero Project is named. The other male members of her family, Declan and Leo, both share this character in their Japanese names. Given the kanji "零" for the Akaba family's male, her name may refers to "zero", a reference to her using the natural energy of the world to reset the damage and turn herself and Z-ARC into the Dimensional counterparts. It also refers to "ray" as in light, given Z-ARC's name similar pronunciation to the word "dark". The name Ray is also a diminutive of Rachel which means "female sheep", possibly refers to the fact that she took everyone's sins of being responsible for who Z-ARC became and the destruction of the original world with her for everyone to "reborn" again into the "new worlds" (the four dimensions). Finally, her name may also refers to Rhea, the Titan earth goddess of fertility and motherhood.

In the dub, Ray speaks with a voice similar to Zuzu Boyle, but more mature. 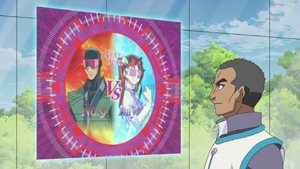 Ray was a professional Duelist in the Original Dimension and is first seen as a profile picture on a holographic TV screen in her father's lab being matched up against another Duelist called No.9 in a tournament.[2] Though not stated, it is implied that Ray was possibly a fan of Z-ARC's Dueltainment and admired him as she was shown watching many of Z-ARC's performance alongside her father. However she slowly grew to fear him as his Dueling style increased in brutality and bloodshed. 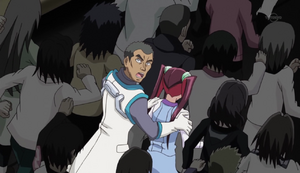 Ray was by her father's side when Z-ARC declared his desire to destroy the entire world with his four dragons for the sake of fighting. She and her father evacuated from the tournament's stadium, witnessing as Z-ARC attacked the audience and united with his four Dragons using "Astrograph Sorcerer".[2] She felt the four dragons' rage of being used as an entertainment for human (In the dub, she also felt Z-ARC's rage at the crowd for their endless and impossible expectation upon him, their insatiable desire for the Duel, and that no one accepted his challenge any longer once he was at the height of his fame).

When Leo finished creating the Four Nature Cards to seal Z-ARC away, Ray took them, refusing to let her father sacrifice himself. She confronted Supreme King Z-ARC and used the cards to absorb the natural energy into her body and defeat him. However, the result of their battle led to the United World to be split into Four Dimensions while her soul split into four and revived in each of the dimensions as Zuzu Boyle (Standard), Celina (Fusion), Rin (Synchro), and Lulu Obsidian (Xyz), all of whom appeared near Z-ARC's reincarnations. At the moment of being divided, Z-ARC's will to become one again reacted to Ray's will to keep Z-ARC split which resulted in the creation of Pendulum Summoning.[3]

This incident eventually prompted her father to start the Arc Project as a means to carry out Revival Zero to rejoin the dimensions into their original form and revive Ray in her original form.[1] 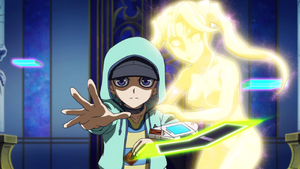 Ray's spirit conveying her will through Riley.

After her father began the process of merging her reincarnations using the ARC-V Reactor, Ray's spirit left her fragments to convey her feelings to Riley Akaba and she told her to revive her before Z-ARC, or Z-ARC would destroy the world again. She stood by Riley's side in her Duel against Declan.[4] She told Riley that Z-ARC's revival was close after Yuri absorbed Yugo.[5] When Leo activated the ARC-V Reactor, Ray's soul suddenly disappeared, and Riley found herself unable to hear Ray's voice. However, she wasn't reviving as soon as Leo had expected because he had rushed the revival process thus the ARC-V Reactor didn't fully charge, leaving Ray as a bodiless spirit within the machine.[6]

After Z-ARC revived, Riley could hear Ray again yelling for her father to revive her as she was the only one who could defeat Z-ARC.[7] She later told Riley that Leo was trying to split the world again using the Four Nature Cards that had revived instead of her.[8] She explained to Riley that Leo planned to battle Z-ARC with the cards and contacted Riley before she could follow Declan after Declan went to help Leo. She met with Riley inside the ARC-V Reactor in a visible state.[9] 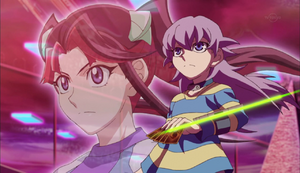 When Riley offered herself to become Ray's vessel, she accepted and possessed her body. While they were running to the battlefield, Ray was asked by Riley how she Dueled Z-ARC with the four cards. They then ran into Moon Shadow who took them to confront Z-ARC, intruding the Duel just as Declan was defeated. Ray recovered the four cards from Leo's Graveyard and fulfilled the conditions to activate them, which succeeded in destroying "Supreme King Z-ARC and his Supreme King Dragons. When Z-ARC refused to give up and persisted that Yuya was no more, Ray told Z-ARC that Pendulum Summoning wasn't just born from his malice and declared that Yuya still existed within him. With Zuzu's soul momentarily coming out to reach for Yuya, he fought off Z-ARC's control and increased Ray and Riley's LP, allowing them to activate the effects of the four cards again to deliver the finishing blow. To prevent Z-ARC's soul from splitting into four again, Riley took over for Ray by ejecting her soul out to seal away Z-ARC into herself instead of splitting the Four Dimensions as Ray had during their last battle.[3]

Following the battle with Z-ARC, Ray's fate was unknown but Declan theorized that she most likely still inside the remnants of the ARC-V Reactor.[10] Leo managed to collect what appeared to be Ray's spirit, though he was unsure that it was Ray and theorized that Ray's fragments would eventually revive as Zuzu Boyle.[11] During Yuya and Declan's Duel, Ray began to react and she revived when Yuya won. She then traveled the Four Dimensions and brought all of Yuya's friends and family to the stadium to witness her revival as Zuzu.[12]

Most of Ray's Deck is unknown, but she is shown to have used the Four Nature Cards to separate Z-ARC and his Four Dimensional Dragons. The cards focus on locking down monsters with different Summoning methods and changing them into Normal Monsters. The utilizing of these cards indicate that Ray mastered Fusion, Synchro, and Xyz Summoning because the cards require three monsters of each type to be in the Graveyard for their effects to be activated.

By using "En Moon", "En Winds" and "En Birds", Ray can change Fusion, Synchro and Xyz Monsters on the field, Graveyard or banished into Normal Monsters. Then, by using "En Flowers" Ray can negate all face-up monster effects, including Pendulum, and destroy them, inflicting damage for each monster sent to the Graveyard.