Red-Eyes B. Dragon resided in the volcanic area of the World of Capsule Monsters, before becoming the third Capsule Monster in Joey Wheeler's command. 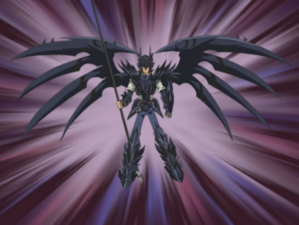 Red-Eyes B. Dragon aggressively swooped towards Joey Wheeler, who was reluctant to fight back, as he saw Red-Eyes as an ally, having used its card in Duel Monsters. However he noticed Red-Eyes was not actually attacking him. Red-Eyes B. Dragon fused itself with Joey, becoming a suit of armor for him. Joey attacked his friends, including Yami Yugi, who was similarly clad in Dark Magician armor, and tried to stop them from getting the Blade of Chaos. Joey realized he was behaving differently, but had no control of himself, while the armor had a mind of its own. Joey communicated with Yugi Muto and informed him that Red-Eyes Black Dragon had been infected and Yugi would need to destroy Red-Eyes to break the spell. Joey was able to hold his body still long enough for Yami to attack him, breaking Joey and Red-Eyes apart.[1]

Red-Eyes attacked Joey and his friends, but Yami used a Magic Cylinder spell to redirect the attack, causing Red-Eyes to crash to the ground. Joey then ran over to it and pulled the Blade of Chaos, the source of the infection, from its body. After the sword was destroyed, Red-Eyes withdrew itself into a capsule, from which Joey could summon it.[1]

Joey summoned Red-Eyes to fight Battle Ox in the labyrinth. However Red-Eyes was too big to maneuver within the maze's corridors.[2]