From Yugipedia
Jump to: navigation, search
This article is about the Crimson Devil. For the card of the same name, see "Red Nova (card)".

Red Nova, known as Scar-Red Nova (スカーレッド・ノヴァ) in the Japanese version, is the Crimson Devil and the strongest of the Earthbound Immortals. It is known to be a mercilessly brutal demon, to the extent that the Dark Signers did not dare attempt to harness its power.

Red Nova is significantly different to the other Earthbound Immortals; rather than being a stylized version of its Nazca Line, the Serpent, it is a massive demonic figure. Red Nova is crimson and black in color; another stark difference from the other Immortals. Red Nova has a crested head with yellow eyes and large ears with prominent lobes, in addition to large white teeth. Its shoulders are broad, and its biceps skinny with two circles surrounding the bicep. Red Nova's forearms are large and red-skinned, almost akin to long gloves in appearance. The torso seems to be more black, and has multiple crimson appendages emerging from it in the shape of snakes.

In its true form, it single-handedly fought against the Crimson Dragon 5,000 years before the other Earthbound Immortals and lost. Red Nova drove the Crimson Dragon to its limits and was only stopped by a legendary Signer who possessed a Blazing Soul. 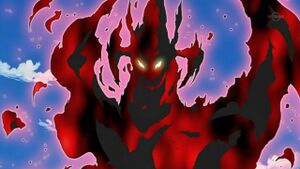 The Crimson Devil has a fire demon servant, the Familiar of Red Nova, who plans to offer the body of Jack Atlas as a vessel, to awaken the Crimson Devil from its 10,000-year slumber. It is said to be associated with the serpent Nazca Line. Jack agreed to the match in order to increase his own power. As the ritual Duel continued, Red Nova began to awaken; its serpentine appendages filling the pit below Jack.

Towards the end of the Duel, Red Nova was summoned by his servant to take Jack, and Red Nova's head and hands burst through the walls. However, the Crimson Dragon appeared, helping Jack acquire the necessary power through Blazing Soul to capture Red Nova and seal it into "Red Dragon Archfiend" giving it the ability to evolve into "Red Nova Dragon", with which Jack defeated the Familiar.