Banish (Japanese: Jogai, lit. "exclude"), known as remove from play prior to the Problem-Solving Card Text update, is a term used to describe the act of making a card banished, causing the card to leave its current location. Cards can only be banished by a card that uses the word "Banish".

Thematically, cards which banish tend to imply either that the card's soul is being removed (e.g. "Kycoo the Ghost Destroyer", "Bazoo the Soul Eater") or that the card is sent to another dimension (e.g. the "D.D." series).

If a card controlled by a player that is not its owner is temporarily banished by a card like "Interdimensional Matter Transporter", while banished it will be in the possession of its owner, but when it returns to the field it will return to the side of the field of the player that controlled it when it was banished. If its owner does not have an unoccupied Zone on the field to return it to, the card is instead sent to the Graveyard. Furthermore, if the effect that gave temporary control of that card to the opponent is no longer active, it will then return to the original owner.[2] If a card would be banished when it leaves the field, if it is temporarily banished by another card effect, it does not return to the field. 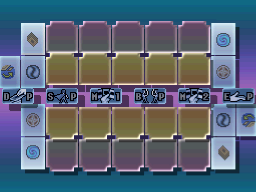 In Yu-Gi-Oh! Duel Links, banished cards are represented by an icon depicting a blue disintegrating card backing; previously, they were represented by an icon depicting a purple tombstone marked with an "X". In most video games, banished cards are placed in a pile to the right of their possessor's Graveyard (from their possessor's perspective). 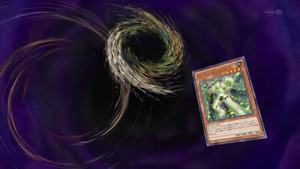