Reshef the Dark Being (Reshef of Destruction)

Reshef was sealed, until Sol Chevalsky turned the Egyptian God Cards into stone in order to give their power to Reshef. The player, Yugi Muto and Joey Wheeler tried to collect the Millennium Items in an attempt to regain the power of the Egyptian Gods and defeat Sol Chevalsky, preventing Reshef from gaining its power. When the player defeated Sol Chevalsky, freeing him from the Dark Being, Reshef was already strong enough to exist without a body, and the player had to defeat him to save the world. 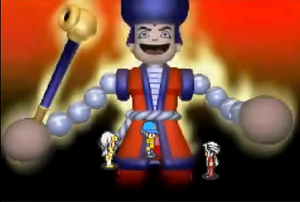 By inputting the password 25410867 into a computer at Kame Game, the appearance of Reshef will change into that of Goemon Impact, when the player faces him. Goemon Impact is a character from Konami's video game Legend of the Mystical Ninja.

Reshef plays a beatdown Deck and begins with 40,000 Life Points. Reshef has three copies of "Swords of Revealing Light" which can stall enough turns to gather Tributes to Summon the Egyptian Gods, and "Change of Heart" to take the player's card to use as a Tribute.[1]