Rin's bracelet is one of the Four Dimension Bracelets item owned by Rin and formerly owned by Ray Akaba. The bracelet represents Synchro Summoning in the Yu-Gi-Oh! ARC-V anime.

It is a thick, metallic bracelet that fits the circumference of Rin's wrist. However, as a child, Rin's wrist was smaller in comparison to the bracelet. It has a small green gem set in the center of an ornate spiral design that rests over a series of three stacked rings.

The swirling metallic bands create a wind-themed design that is additionally reminiscent of rings created in a Synchro Summon. Said design might also be inspired by "the traditional themes of natural beauty in Japanese aesthetics" (花鳥風月), referencing the "風" (wind) for Rin as well as her wind-based Wind Witch deck.

Unlike Zuzu's bracelet, Rin's does not react when at least two of Yuya's counterparts are present, implying it has a different ability, which is still unknown.[1] 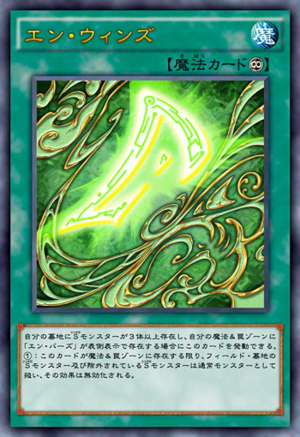 The bracelet was originally a card created by Leo Akaba using natural energy from the wind. It was used with the other three cards to confront Z-ARC, however, Ray took them from her father in order to oppose Z-ARC herself. During the Duel, the card took its shape as the bracelet and appeared on Ray's right arm. Along with the others, the bracelet helped her stop Supreme King Z-ARC, and split him, along with herself and the Original Dimension. Later, Rin gained ownership of the bracelet.[2]

Rin is seen wearing this bracelet in her childhood as well as when she was being pursued by Yuri.[1]

When Rin was transferred into the ARC-V Reactor[3], her bracelet returned to its card form. It was then taken with the other three cards by Leo to use against Z-ARC again, but they were destroyed by Z-ARC, who defeated Leo.[4] However, using Riley's body, Ray retrieved the Four Nature Cards from the Graveyard and activated them to slowly strip away "Supreme King Z-ARC's" protection effects and causing the Four Dimension Bracelets to materialize on Riley's arm. With Yuya's help, Ray defeated Z-ARC again with the effects of the Four Nature Cards and Riley sealed away Z-ARC's spirit within her own body to prevent his soul from being split again.[5]

Following the battle against Z-ARC and the Standard Dimension's rebirth into the "Pendulum Dimension", the bracelet disappeared following Riley's regression into an infant.[6]