Rio Kastle, known as Rio Kamishiro ( Kamishiro Rio) in the Japanese version, was a human who died in a car accident, with the soul of the Barian Marin continuing Rio's life after her death.

Rio and her twin brother Reginald lived in a mansion with their parents. One night, Reginald was chasing Rio around the house after she stole his Deck of Duel Monsters cards that his father gave him. Their fighting resulted in a suit of armor nearly falling on Rio, but Reginald pushed her out of the way, earning a scar on his right shoulder.[1] One night, Reginald and his family were traveling in a car, which was hit by a truck driven by Chironex, who was fleeing from the police. All four were hospitalized.[2] 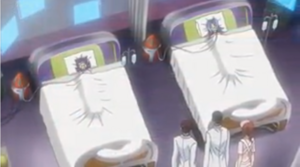 Reginald and Rio under medical attention.