Rite of the Duel

From Yugipedia
Jump to: navigation, search
This article is about the Duel. For the arc, see Rite of the Duel (arc).

The Rite of the Duel (いの Tatakai no Gi), sometimes translated as the Ceremonial Battle, was the final battle between Yugi Mutou and Atem. The battle served to dictate if Atem was ready to pass on the afterlife.

One month after the Shadow RPG, Yugi Mutou, Katsuya Jonouchi, Anzu Mazaki, Hiroto Honda, Ryo Bakura, Ryuji Otogi and Sugoroku Mutou traveled to Egypt,[1] having learned Atem's name and collecting all the Millennium Items, bar the Key and Scales, which they were informed were in Egypt.[2]

Rishid, Marik Ishtar and Ishizu Ishtar translated the hieroglyphs, surrounding the door to the afterlife in the Shrine of the Underworld. They met Yugi when he arrived in Egypt and informed him that the hieroglyphs said that the door was to be opened by placing the Millennium Items in the Tablet of the Pharaoh's Memories and speaking the pharaoh's name, but the pharaoh's spirit could not be put the rest, while carrying his sword, so he would need to be defeated in a Rite of the Duel. As Duelists they understood Duel Monsters cards to be their equivalent to a sword.[2] 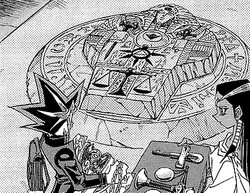 Atem returns the Millennium Items to the Memory Tablet.

Due to a sandstorm, the group could not fly to the Valley of the Kings, so they traveled by boat. During the journey, Yugi made the decision that he would be the one to Duel Atem.[2] Atem had heard Yugi and Marik talk about the Rite of the Duel, so he kept away to give Yugi privacy to work on a Deck for the battle. Atem surfaced after Yugi was finished, and Yugi suggested he build a new Deck too, since he knew his current one's weak points. Atem finished his Deck, just before the boat ride ended.[3]

Yugi, Atem and their companions went to the Shrine of the Underworld, where the Tomb Guardians clan presented them with the Millennium Key and Scales. When Atem placed the seven items in the tablet, the Eye of Wadjet on the door shone upon him and split him and Yugi into separate bodies.[3]

Jonouchi was unsure who to support, since Yugi winning would mean Atem's departure, but Atem winning would stop Yugi gaining his independence. Anzu was more in favor of not being separated from Atem.[4] 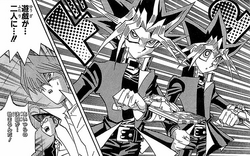 During this Duel, both players start the game with six cards in their opening hands instead of five.

"Monster Reborn" was one of the cards in Atem's first hand. He discarded[4] "Slifer the Sky Dragon"[5] to Summon "The Tricky" and Set "Bounce".[4]

Atem suspected Yugi was sealing his attacks to give himself a chance to Summon a high-Level monster[4].

Atem activated "Rebellion" to make "Green Gadget" attack Yugi, but Yugi had predicted he would do that and activated "Stronghold the Moving Fortress", which blocked the attack and Summoned itself as a 2000-DEF monster.[4] 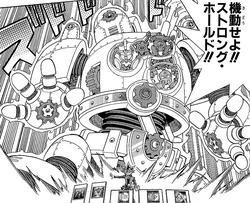 "Stronghold", powered up with the "Gadget" monsters

Yugi activated "Ties of the Brethren", paying 1000 Life Points (Yugi: 4000 → 3000 Life Points) to Summon "Red Gadget" and "Yellow Gadget" in Defense Mode. Atem pointed out that the cards would be able to attack or be Sacrificed and warned Yugi that he would not be able to win by surrounding himself in defensive monsters. However Yugi claimed that all of his monsters were strategic pieces in attacking Atem and got the three "Gadget" monsters to fit in place in "Stronghold", rotating its gears, allowing it to function as a 3000-ATK monster.[4]

Yugi attacked with "Stronghold", but Atem activated "Bounce", transferring the effect of "Swords of Revealing Light" to Yugi, stopping the attack.[4] Yugi was relieved at this point to see that Atem was taking him seriously.[6]

Yugi's friends started to worry about the upperhand Atem had taken, but were surprised to see him smiling. Anzu wondered if it was because he did not want Atem to leave, but Jonouchi told her not to be stupid, since Yugi was not the kind of Duelist to grin when he is defeated. He claimed it was because Yugi was having fun; having always followed Atem before, Yugi was now facing him as a rival and was happy to have Atem giving him all he had got. Anzu thought about the fact that Yugi had always been following and Jonouchi urged Yugi to show Atem his strength.[6]

Rishid and Marik were surprised to see Yugi play a monster in Attack Mode that would result in his loss, if attacked by "Obelisk". Atem suspected he planned on playing "Turn Jump", which would make "Silent Swordsman" stronger, but not strong enough.[6] 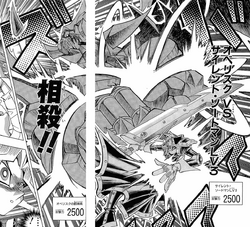 "Silent Swordsman LV3" and "The God of the Obelisk" destroy each other.

Atem was impressed and thought Yugi had grown, while Yugi thought he had not surpassed Atem just yet. Anzu wondered how Atem felt and suspected as "the other Yugi" he would be happy, but as "Atem" thought he might be sad.[7]

Atem Set a card and ended his turn.[7]

Yugi tried to think what he would do if he was Atem. In Atem's position, he would be afraid to lose and be separated from his friends, so he would stack his Deck with his strongest cards, including the God cards. Due to the number of Sacrifices needed, he doubted Atem would include all three God cards and probably just include one. Since one of the Gods, "Obelisk" was already in the Graveyard, Yugi knew he would play[7] "Monster Reborn[8] next if he were Atem.[7] 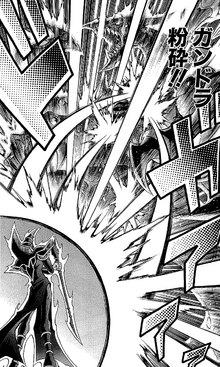 "Dark Magician" attacked "Marshmallon" and since he used a magical attack he was able to destroy it. Yugi remembered how reassuring it was to have the "Dark Magician" on his side, but as an enemy, he thought there was no stronger foe.[7]

Yugi decided to take a chance, knowing he would lose the Duel if he failed, and activated "Gold Sarcophagus", sealing[7] "Monster Reborn"[8] from his Deck, inside the box. Anzu noted that "Gold Sarcophagus" resembled the Millennium Puzzle box, which had brought Yugi and Atem together.[7]

Yugi used the effect of "Blockman" to split itself into two monsters and Sacrificed them to Summon "Gandora the Dragon of Destruction". Yugi paid half of his Life Points (Yugi: 2000 → 1000 Life Points) to get "Gandora" to destroy all monsters on the field, but Atem countered with "Mirror Force", to reflect the attack at "Gandora", destroying it.[7]

Atem noted that Yugi had two face-down cards, no cards in his hand and that he had not given up yet. He Set "Magicians Unite" and Yugi noted that Atem now had only one card in his hand.[5] 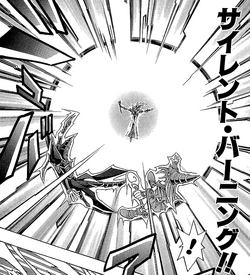 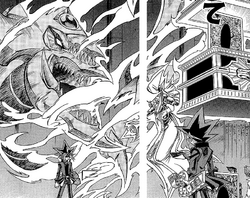 "Silent Magician" attacked Atem directly. Atem thought Yugi's "Sanctity-Silent Magician" combo was almost perfect, but made the mistake of filling his hand too. He then activated his face-down, "Monster Reborn", reviving "Slifer the Sky Dragon" to counterattack.[5] Yugi broke the seal on "Gold Sarcophagus", revealing "Monster Reborn" to be the card he had placed inside it, forbidding either player from using it. "Slifer the Sky Dragon" disappeared and realizing his last card had been predicted, Atem admitted Yugi had surpassed him.[8]

Jonouchi and Honda were surprised by Yugi's choice to seal "Monster Reborn" away, when it was a card he could also have made use of. Ishizu interpreted it to be Yugi's message to Atem that the souls of the dead must not linger in the world of the living.[8] 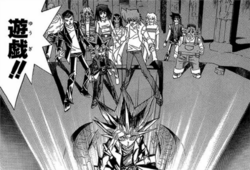 Atem's friends call him back, before he leaves.

Yugi dropped the ground and began sobbing. Atem insisted that as winner, he should not be on his knees, but Yugi replied that he was too weak. However Atem told him he was not weak and had always had a power that no one could ever beat; the power of kindness, which he had taught to Atem. The courage Yugi displayed by fighting, showed Atem the path he needed to take. Yugi began to say "other me", but Atem corrected him, saying he was not "the other Yugi" anymore and that Yugi is no one, but himself and the only Yugi Mutou in whole world.[8] 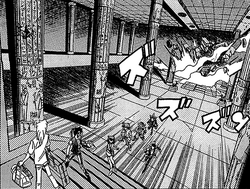 The group leave the temple, as the Memory Tablet sinks into the ground.

Atem faced the door the afterlife and Ishizu instructed him to say his name to its Eye of Wadjet icon. Atem complied and the door opened. As he began to walk through, he was stopped by Yugi, Jonouchi, Anzu and Honda. Honda wept and asked if he really had to go. The other three began to cry too and Anzu said that she could not understand why he had to leave. Jonouchi replied that she did not need to understand it, she just needed to accept it and never forget him. Jonouchi called Atem "Yugi" and told him he would still be Yugi, even if he is a king and even if a thousand years, pass they would still be friends. Yugi vowed to never forget Atem, who then gave a thumbs up before continuing to walk towards the door.[8]

As he passed through the door, Atem's clothing changed to his pharaoh regalia and he was united with his companions from ancient Egypt, Mahado, Seto, Akhenamkhanen, Akhenaden, Siamun Muran, Shada, Isis and Kalim.[8]

The door to the afterlife closed after Atem's passing and the ground below the Memory Tablet, collapsed breaking the tablet and dragging the Millennium Items into the depths of the Earth. With the shrine unstable, the group all exited to the surface and Yugi bid farewell to the Millennium Puzzle, as he watched it fall. As they ran to safety, an apparition of Shadi appeared, standing over where the tablet was.[8]

Outside, Ishizu said that with the pharaoh's soul delivered, the role of the Millennium Items had ended and the door to the afterlife had been closed forever. As the group reflected on Atem's departure, Yugi thought about how everyone has a story of their own and that his was just beginning.[8]

The following cards appeared in this Duel.