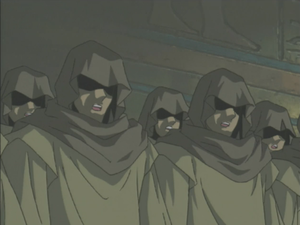 The robed men (ローブ男 rōbu otoko) are a group of characters in the Yu-Gi-Oh! anime, who partook in Shadow Games, involving summoning ka from stone tablets. They aided Priests in Diaha and in more modern times played in secret, with Maximillion Pegasus among their members.

The name "robed men" is used in the Japanese ending credits for one of their appearances. With the exception of Pegasus, they are voiced by Eiji Takemoto in that instance.

The robed men were magicians who sealed monsters in stone slabs to stop disaster and bring about peace. However the tablets gained evil power and the magicians were manipulated by Priests, who disobeyed the Pharaoh and used the evil power in the tablets to battle.[1]

Robed men stood on either side of a Diaha between Seto, who was rebelling against Pharaoh Atem, and another Priest, who was fighting for Atem. The robed men chanted as monsters were summoned from the stone slabs.[1]

Seto's Lord of Zemia was defeated by the other Priest's Winged Dragon, Guardian of the Fortress, causing robed men on Seto's side to be struck by lightning and disappear. (In the English dub, they were sent to the Shadow Realm.) More men on Seto's side were wiped out when the opposing Priest used Kaiser Dragon to destroy Seto's La Jinn the Mystical Genie of the Lamp.[1]

(In the Japanese version, the robed men's chanting was incomprehensible. In the English dub they said "Magic powers heed my cry. Release the monster trapped inside." when summoning "Lord of Zemia" and "Let two be one" when fusing Kaiser Dragon.)

When Maximillion Pegasus caught Téa Gardner, Tristan Taylor, and Bakura Ryou trespassing in his sanctuary, he said he would show them a glimpse of his world and used the Millennium Eye to seemingly cause them to be swallowed up by the floor. The three fell unconscious and when they woke up were in a shrine with hieroglyphics on the walls, where the robed men were chanting and watching Pegasus and another robed man play a Shadow Game.[2]

Each player raised their hand in turn, causing a stone slab, depicting a Duel Monster, to come out of the ground. Pegasus' slab depicted "Blue-Eyes White Dragon", which was stronger than the "Crawling Dragon" played by his opponent. This caused his opponent's slab to shatter, resulting in him losing and being engulfed in green flames.[2]

Téa gasped at the sight of the man being burned, alerting the other robed men of her, Tristan and Bakura's presence. The men all approached them and Pegasus explained that they had just witnessed a Shadow Game. He read Téa and Tristan's minds, noting their curiosity about the Millennium Eye and told them it granted him the Mind Scan power. He then attempted to read Bakura's mind, but was blocked by the power of the Millennium Ring. Yami Bakura emerged and the two Millennium Items began to interact, after which Téa, Tristan, and Bakura were all transported back to their beds.[2]

Ishizu Ishtar told Seto Kaiba about Duel Monsters being based on the battles that took place in ancient Egypt, including the robed men's roles as magicians. She then showed him a vision of the battle between Priest Seto and the other Priest, showing robed men aiding both parties.[1]