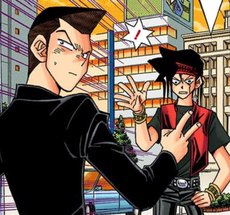 Rock-paper-scissors or roshambo is a two-player game, where each player simultaneously forms their hand into one of three shapes; rock, paper or scissors. The winner is determined by comparing the chosen shapes, rock beats scissors, scissors beats paper and paper beats rock. If both players pick the same shape, it is a draw. In the event of a draw, the game can be repeated until a winner is determined.

In the Yu-Gi-Oh! Trading Card Game, rock-paper-scissors is one of the methods suggested by the rulebook for determining which player decides who moves first. This is reflected in a number of video games.

The card "Transmission Gear" requires players to play rock-paper-scissors as part of its effect (and is currently the only one).

The "Geargiano" archetype and the 'ingredients' for "Curry Pot" each consist of a trio of monsters that are depicted making one of the rock-paper-scissors shapes in their artworks.

Tenzen Yanagi will challenge the player to rock-paper-scissors once per day for 100 DP in Yu-Gi-Oh! 5D's Tag Force 4. If the player wins, Yanagi will award an alternate artwork card.

Rock-paper-scissors is referred to as roshambo or ro-sham-bo throughout the Yu-Gi-Oh! manga, where it makes a number of appearances as a choosing method.

Dark Yugi played roshambo against Ushio and Kokurano to determine who moved first in Money and Knife and Paper Crash!, respectively, with Dark Yugi winning in both cases.[1][2]

A duo of Rare Hunters played roshambo with each other to try and decide which of them should Duel Dark Yugi first. However they kept tying, which tried the patience of Dark Yugi, who was in a hurry. Seto Kaiba then intervened and suggested that he and Dark Yugi face the Rare Hunters in a Tag Duel.[3]

Hiroto Honda and Ryuji Otogi played a game where the winner got to carry Shizuka Kawai. Honda picked scissors and Ryuji picked paper. However while Honda was distracted by the sound of Mai Kujaku laughing, Ryuji changed his hand to represent rock.[4]