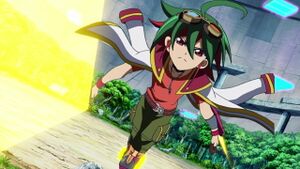 The Rollerboots in use by Yuya Sakaki.

Rollerboots are a pair of boots with retractable wheels that have Solid Vision "tires". 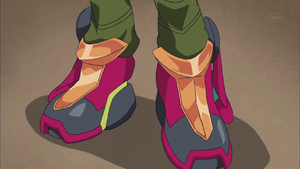 The Rollerboots are red with orange armor on the fronts and wheels that glow yellow when they are activated.

They were first seen being worn by Allen Kozuki, who used them to look for Saya.[1] He then gives them to Yuya, passing on his feelings to him.[2] Yuya first used the Rollerboots in his Duel against Iggy Arlo to dodge his assaults while finding Action Cards, which successfully helped him win the Duel.[3] He used them again in his Duel against Captain Cutter, but when Yuya skated up the rope for an Action Card, Cutter had the ship to turn hard knocking Yuya off in to the ocean until Crow saved him.[4] When Duel Academy students surrounded the Lancers, Yuya used them to evade the students while initiating their own plan.[5] When Yuya used them against the Battle Beast, he was blocked from getting an Action Card due the Battle Beast's sheer speed and agility.[6] When he was being attacked directly by Sanders' "Gladiator Beast Tamer Editor", Yuya used them with "Evasion" to dodge it.[7] When Battle Beast used the effect of "Gladiator Beast Fort" to inflict damage, Yuya used them to grab "Acceleration", dodging the first attack but couldn't find an Action Card for the second and was saved by Jack's Red Gazer.[8] When Leo attacked Yuya directly with "D/D/D Doom King Armageddon", he used them to grab "Evasion" and dodge the attack.[9] When Yuri attacked him with "Dark Rebellion Xyz Dragon", Yuya used them to grab "Miracle" but Yuri destroyed it with "Crush Action" to prevent him from using his face-down. This would be the final time Yuya would use the Rollerboots as they were destroyed when Z-ARC took control of him.[10]

Following Z-ARC's defeat and the Standard Dimension being reborn into the "Pendulum Dimension", the Rollerboots were restored and Yuya used them to get to You Show Duel School. When Frederick, Tate, and Allie asked Yuya where he got them from, he told them that someone gave them to him but couldn't remember who it was due to losing most of his memories.[11] Yuya would use them in the Battle Royal against Gong, Sylvio, and Moon Shadow to get Action Cards and travel throughout "Quartet of Quandry".[12][13] He would also use them against Dennis, but was stopped by "Performage Trapeze High Magician" twice from getting an action card.[14] Yuya used them to grab "No Action" and "Encore" during his Duel with Shay.[15] He uses them for the final time in his Duel against Declan.[16]