From Yugipedia
Jump to: navigation, search
For other versions of this character, see Roman Goodwin (disambiguation).

Roman Goodwin, known as Rutger Godwin (sometimes romanized as Rudger Goodwin) in the Japanese version, was the apparent leader of the Dark Signers, as well as the Signer who originally possessed the Dragon Head birthmark.

He wore black robes that were accented with red stripes and which corresponded to his "Earthbound Immortal", as his Mark of the Shadows represented the Spider. It was also revealed that he was the original Signer with the Head Mark of the Dragon on his left arm, though he replaced it with a metal arm since when became a Dark Signer.

Originally, Roman had a kind personality, who loved his brother Rex and believed in the infinite possibilities that Ener-D had to offer. However after being exposed to the light of the Ener-D reactor, he begun mentally struggling to keep his sanity as his dragon birthmark and the Dark mark he obtained fought for control over his body, and he eventually was consumed by the Dark Mark according to Rex Goodwin.

As leader of the Dark Signers, Roman became very much ruthless and sadistic, and was even described as mad by Yusei. Much of his demeanor stemmed from his belief in destiny, especially in his jealousy for Dr. Fudo and the battle between both groups of Signers. As such he revered Ener-D as the light of destiny itself, and was willing to sacrifice as many innocent lives as it took to appease it and the Wicked Gods themselves.[1][2]

Roman had the ability to possess ordinary people and used spiders he controlled; potentially using them as pseudo or "fake" Dark Signers (Shadow Drones in the dub) who acted as unwilling and unsuspecting pawns for him. The number of his "Dark Spiders" currently possessing a victim was indicated by the number of legs missing from his birthmark. When one of them lost a Shadow Duel, the spider controlling them died, which caused Roman's birthmark to regrow its missing limb, and caused him pain when one of the people he controlled lost.[3] He was also capable of switching himself out with those that were captured, as shown when he switched himself out for Rally during his first Duel with Yusei.[4] 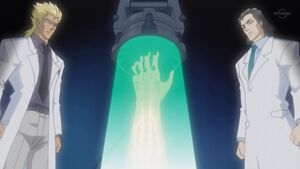 Roman and Rex, while working for R.R.D..

Roman Goodwin was the older brother of Rex Goodwin. Just like his brother, Roman served as an assistant to Professor Fudo, while working in R.R.D.

Dr. Fudo was bent on canceling the Ener-D project due to the natural disasters occurring in Domino City as a result of using the system. But wanting to continue the research, Roman researched occurrences similar to what was happening in Domino City. He then came across the Nazca Lines. Once at the site of the Nazca Lines, a mysterious man who belonged to the Iliaster group spoke to him. The man told Roman that he was destined to activate the Ener-D Reactor and told him to look into the light of the Ener-D Reactor. After returning to the facility, Roman looked into the light of the Ener-D Reactor. He saw the battle between the Crimson Dragon and the Earthbound Immortals. The Spider's dark mark appeared on Roman's arm, where it struggled with the Dragon Head birthmark for control of his body.

Under the influence of the Spider Mark, Roman ousted Dr. Fudo as head of the Ener-D project, having claimed "Stardust Dragon", "Red Dragon Archfiend", "Black Rose Dragon" and the "Ancient Fairy Dragon" cards, which were the keys to activate the Ener-D Reactor's control units. Dr. Fudo managed to take three of the cards and fled, and left behind "Ancient Fairy Dragon" when he was wounded by Roman's henchmen.

When he nearly succumbed to the power of the Dark Signers, Roman decided to leave his Mark of the Dragon to destiny by tearing his left arm off and placed it in a preservation canister (which was removed from the dub, and Roman still had his hand without being ripped off completely). He gave Rex the canister and told him to gather the Signers and someday defeat him. After that, he activated and overloaded the Ener-D Reactor which ultimately lead to the Zero Reverse, and killed himself and subsequently allowed the first Earthbound Immortal released, Uru, to revive him as a Dark Signer. Sometime after his revival, he set up a base in the old Reactor and eventually met and teamed up with 3 other Dark Signers, who served him as his subordinates. One of them, Misty, was still in the city disguised as a human while Roman and the others were in Satellite; it is likely that Roman had sent her there to find the fifth Dark Signer.

After the Fortune Cup ended, Roman possessed Grady and Trudge, in order to test the Signers, Yusei Fudo and Jack Atlas. When the Signers along with Mina, Leo and Trudge venture to Satellite and are meet-up with Martha, Roman appeared and imposed a Duel. Jack wanted to, but was stopped by Yusei, who told him that it was too dangerous to Duel here, especially if a geoglyph appeared. Jack was instructed to take Martha and the kids somewhere safe, while Yusei, accompanied by Akiza, faced Roman in a Shadow Duel in another location.

However, three of the children decided to watch the Duel. As the Duel unfolded, Yusei and Akiza noticed two kids near the flames that were caused by the geoglyph and wondered how they got in when they were not Signers. As Roman prepared to Summon his "Earthbound Immortal", "Uru", Yusei and Akiza feared that once it was Summoned, it could have used the kids' souls as sacrifices. Luckily, Jack appeared and uses his birthmark to stop the kids from being sacrificed. Yusei eventually managed to gain the upper hand in the Duel, but as a final insult to Yusei, Roman switched places with Rally, who he had possessed with his spiders, and forced him to take his place in the Duel. Rally managed to destroy "Uru", but doing so reduced his Life Points to 0 and killed him.

Roman, along with the other Dark Signers, later appeared before their rivals, the Signers, to begin their final battle. Each of Roman's comrades were waiting at each of the control units of the original Ener-D Reactor with the purpose of Dueling against their correspondent Signer rival. As for Roman, he awaited within the place where the system itself resided. After Devack's defeat at the hands of Luna and Leo, he killed Greiger in order to remake him into a Dark Signer by hanging him over the Original Ener-D Reactor. 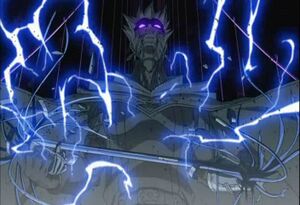 Roman blows up the bridge (removed in the dub)

After Kalin's defeat, Roman's mark seemed to cause him anguish as it escalated up his arm. But then he was confronted by Rex Goodwin, who Dueled him. Rex lost on purpose in order to be reborn as a Dark Signer like his brother.

Yusei and his friends entered the crater in the B.A.D., where they confronted Roman. Although Yusei won, Roman proceeded to tell Yusei that things were not finished yet, as the King of the Netherworld would soon be born. Before Roman dissolved, he detonated a bomb in his left arm, and blew up the bridge and sent Yusei falling into the depths of the Ener-D Reactor. (In the dub, instead of Roman detonating a bomb, Uru's destruction caused the bridge to blow up.) 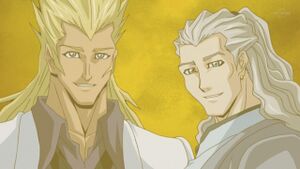 Roman and his brother before passing on to the afterlife

When Rex was finally defeated and the King of the Netherworld was destroyed, Roman and Rex were the only Dark Signers to not return to life.