Rudolph Heitmann is the Vice principal at the Duel Academy of New Domino City.

Heitmann has an arrogant personality, looking down on those who use low Level monsters, believing no matter how hard they try they cannot win with low level cards. His outlook starts to change though during his Duel with Yusei. He shows surprise when Yusei used a Tuner to draw 2 cards, and was shocked more when Yusei used a Tuner monster to Synchro Summon with a card from his hand. After being beaten by Yusei, he realizes the error of his ways and decides not to expel the students.[1]

Heitmann is someone who respects Duelists with high potential and strong monsters and despises Duelists with low potential and low monsters. He tried to expel Leo, Luna, Dexter, Bob, Patty and Sly due to their low performances. Yusei duels the teacher to make sure that the students wouldn't get expelled. Heitmann lost the Duel to Yusei by the same low monsters he despised.

His attitude towards low-performing Duelists and his "Ancient Gear" Deck are nods to the Yu-Gi-Oh! GX character Vellian Crowler. The dub compounds this further by having him being voiced by Sean Schemmel, Crowler's voice actor.

In the dub, the Principal reveals that Heitmann only maintains his high position because his mother (whom he still lives with) is one of the Academy's principal sponsors.

During Yusei's Duel against Z-one he is seen cheering Yusei on.

Heitmann can be found outside of Duel Academy, offering the player a chance to obtain cards with alternate artworks. 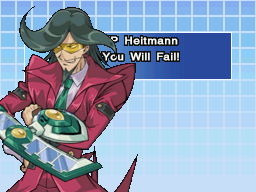 Heitmann, in Reverse of Arcadia

The player can find and duel against Heitmann at the entrance to New Domino City after finishing the main storyline.

Heitmann uses a Deck based on "Ancient Gear" (in the dub, he calls it a "Vanguard Deck"). According to him, this is a vintage Deck that only Elite professors chosen by the Academy are allowed to use. The Deck reflects his philosophy that only monsters with high Levels are useful, by attempting to summon “Ancient Gear Golems” as fast as possible, and using it in combination with cards that take advantage of its high Level to overwhelm the opponent.