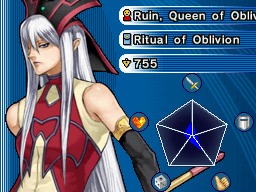 Ruin appears as a Level 2 Theme Duel opponent. She challenges the player to Ritual Summon at least 5 times in one duel against her.

Ruin is a Tag Duel opponent, partnered with Demise, King of Armageddon. They can be unlocked as opponents by winning a Duel using "Final Countdown".