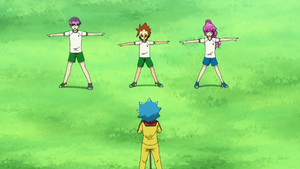 The Rush Duel Training Camp was a training camp in Yu-Gi-Oh! SEVENS, organized by Lucidien "Luke" Kallister in preparation for the Dark Rush Duel Tournament.[1]

After Luke received an invitation to the Dark Rush Duel Tournament, he decided to hold a training camp to prepare for the tournament at a ground outside Goha City. The camp lasted three days; Saburamen, Briscoe, Sushiko Maki, the Duel Dinosaur Club and the Dueling Insects Club all attended the camp alongside the Rush Duel Club.[1] All the attendees bar the Rush Duel Club left the camp on the second day. On the third day, Yuga, Luke, Romin and Gavin were trapped in their cabin due to the actions of the Heavy Cavalry Duel Club and sent Kaizo to get aid from the camp's manager and Seatbastian, who had retired to the administration building after Luke ate all the food in the cabin without Briscoe cooking for them. Rayne and Rino were also intercepted by Galian Townsend on their way to the camp after overseeing Gavin's Student Council and forced to join Goha #6 Elementary's Heavy Cavalry Duel Club, preventing their attendance.[2]