Ryota Kajiki is a character in the Yu-Gi-Oh! manga. This is the original depiction of Ryota Kajiki, known as Mako Tsunami in the English anime.

Kajiki is a fisherman, who lost his father at sea. He is also a Duel Monsters player and took part in the Duelist Kingdom and Battle City tournaments. 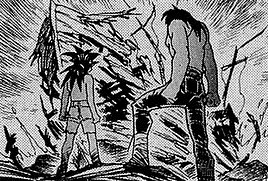 Ryota, as a child, with his father

Kajiki grew up watching the sea and considered to be like a person. He believed himself to be capable of telling when it was laughing and when it was crying. His father was a fisherman. One day, the two of them were out fishing, when Kajiki believed the sea to be in a good mood. However it then changed to a bad mood, which Kajiki credited to a nearby oil spill. The sea rose up and swallowed the boat they had been using. Kajiki and his father were saved by a passing ship, while their own boat sank.[2]

Without a boat of his own, Kajiki's father would borrow other fishermen's boats, on days when the sea was rough and they were too afraid to go out. Kajiki lost his father when he went fishing on one such day.[3]

Years after the shipwreck, Kajiki took part in the Duelist Kingdom Duel Monsters tournament, hoping to win the prize money to buy a new boat.[2] At some point, he won a Star Chip, bringing his total to three.[4] He spent much of the tournament near the island's cliffs, where he went fishing. He left some of his catch cooking on an open fire, hoping it would attract Duelists, whom he could challenge. This would work to his benefit, as the nearest Battle Box, was next to the sea, which greatly benefited his Deck, through the Field Power Source rule.[2] 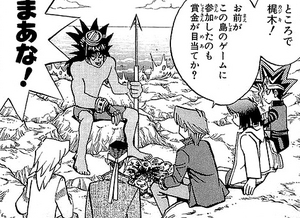 Katsuya Jonouchi spotted Kajiki's fish unattended at the fire and insisted that it was okay for him and his friends to take them. Kajiki tried to get their attention, but was knocked back into the water by a wave. He emerged with an octopus on his head and shouted at them for taking his food. As Kajiki introduced himself, Jonouchi laughed at the octopus on his head, which Kajiki then threw away, much to the dismay of Jonouchi and Hiroto Honda, who would rather have eaten it. Kajiki notices Dark Yugi is among Jonouchi's friends and thinks he has made a big catch. He decides to share his fish with them and tells them the story of what happened to his boat. As the others were about to leave, Kajiki threw a harpoon, into the ground near them, telling them to stop. He explained that they had taken his bait and challenged Dark Yugi to a Duel, where they each bet two Star Chips.[2] 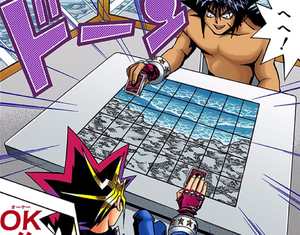 In addition to getting an ATK and DEF increase from the Sea terrain, Kajiki's monsters were able to hide under the water, preventing Dark Yugi from attacking them. They could emerge to attack, a tactic Kajiki referred to as the "sea stealth attack".[2] Dark Yugi tried a "Feral Imp" and "Horn of the Unicorn" combo to attack the water with electricity, but Kajiki saw what he was planning and Summoned "Jellyfish", which absorbed the electricity. Dark Yugi played "Mystical moon", with the apparent purpose to strengthen "Silver Fang". However the moon's effect on tide levels, caused the "Leviathan" to flood the field more than usual. When Kajiki got his monsters to surround Dark Yugi's "Giant Soldier of Stone" to stop Dark Yugi turning it into an island, Dark Yugi destroyed the moon. This returned the tide to normal, beaching Kajiki's monsters, which Dark Yugi destroyed with "Burning Land", winning the Duel.[4]

Kajiki was gracious in defeat and hoped to continue the tournament with his remaining Star Chip.[4] However, he was not one of the four to qualify for the semifinals.

Kajiki took part in the Battle City tournament and managed to earn four Puzzle Cards. Having never been to an aquarium before, he went to Domino City Aquarium, where he later met Jonouchi and Anzu Mazaki. Kajiki mistook the killer whale's pool for a fish tank and the killer whale for a catch, remarking that he would like to take it out and cook it on a grill. Anzu explained that people visit aquariums to look at sea creatures, not eat them. Kajiki found that unusual and thought Jonouchi had come to look at fish. When Jonouchi explained that he was there to Duel, Kajiki laughed and claimed that Jonouchi did not stand a chance against his sea Deck, but accepted his challenge. They decided to Duel on the spot, while the audience for the killer whale show, watched their Duel. Kajiki suggested that they each bet two Puzzle Cards, so that the winner would advance to the championship rounds. Jonouchi agreed and suggested that they each bet two rare cards as well, so Kajiki wagered "Leviathan" and "Fortress Whale", while Jonouchi wagered "Jinzo" and "Insect Queen". Having heard that Jonouchi got far in Duelist Kingdom by luck, Kajiki decided to test his skills for himself.[5] 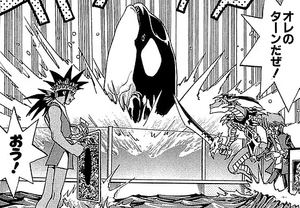 After Jonouchi accidentally Summoned "Parasite Paracide", having forgot to take it out of his Deck, and tried to use "Chasm of Spikes" on an unaffected monster, "Flying Fish", Kajiki doubted Jonouchi's abilities and thought he was not taking the game seriously. He complained about players, who do not fight with their full strength, believing them to be disrespectful to their opponents. From that point, he became more pleased with Jonouchi's efforts.

When Jonouchi tried hiding his monster in "Fairy Box", flooded the field with "Umi", so that he could see air bubbles coming from the monster's hiding place. However Jonouchi's use of "Skull Dice", ensured that his own monster was still stronger.[6] Because of "Umi", Jonouchi's monsters, incapable of swimming, could not attack Kajiki. However, he fused "Alligator Sword" into "Alligator Sword Dragon", which flew across the water to attack. This caused Jonouchi to think the sea was not so tough, a statement Kajiki was determined to prove wrong.[7]

Kajiki played cards, which became hidden under the water, like in Duelist Kingdom. Jonouchi thought he could avoid them by flying over the water, but Kajiki blocked his attacks, with "Tornado Wall". Due to the tide dropping to create the wall, Jonouchi thought he could see that Kajiki had no monsters.[7] However Kajiki had hid his monster, "Legendary Fisherman", behind the killer whale,[3] and referred to this strategy as "Sea Stealth II".[7]

Kajiki Summoned his strongest monster, "Fortress Whale",[7] which would attack Jonouchi directly after "Legendary Fisherman" performed stealth attacks on Jonouchi's monsters. Jonouchi thought about how Kajiki lured opponents to the cliffs at Duelist Kingdom for territorial advantage and suspected he had done the same with the aquarium. With that, he deduced the location of "Legendary Fisherman". He then used "Magic Arm Shield" to put the fisherman in the path of an attack from "Fortress Whale"[3] Jonouchi also used "Panther Warrior" with "Kunai with Chain" and "Lightning Blade" to defeat "Fortress Whale".[8] 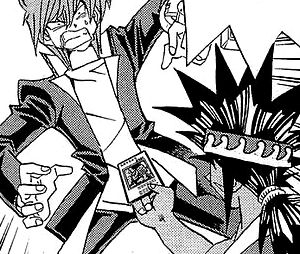 Kajiki insisted it did not matter, when Jonouchi questioned his last move, but Jonouchi refused to accept a victory when his opponent threw the game. Kajiki explained that "Legendary Fisherman" was his trump card, which he always fights alongside because of its resemblance to his father and he could not leave it in his Graveyard. He thought he was being silly, but Jonouchi said he would have done the same thing. Kajiki tried giving Jonouchi "Legendary Fisherman" instead of "Leviathan" as it was his most valuable card. At first Jonouchi could not accept, but Kajiki assured him that his father would think he was putting too much faith in a card and that his father will always fight by his side even without the card.[9]

In Battle City, Kajiki used "Umi" to partially replicate the Sea terrain, which also allowed him to use "Tornado Wall" to block attacks.

Two cards in this Deck were unnamed.