From Yugipedia
Jump to: navigation, search
For other versions of this character, see Sadie (disambiguation).

Sadie, known as Seiko in the Japanese version, is a young lady who works in Ms. Dorothy's card shop in the Yu-Gi-Oh! GX anime. Her name is never given in the English version of the anime, but she is named in the video games.

Sadie is pulled into the alternate dimension with the rest of Duel Academy. She and Dorothy take responsibility for rationing the food during the ordeal.

Sadie appears as a special unlockable opponent in the first three Tag Force games. She is also featured in Tag Force Special. 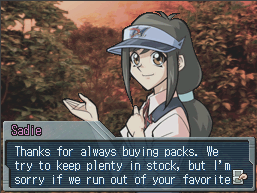 Sadie works at the card shop. During weekdays she can be found in the Forest, thanking the player for being a regular customer and apologizing to them for running out of packs. She is the shop's cashier during weekends and during special events.