Saiko Tendo ( Tendō Saiko), nicknamed Psychic Tendo (サイキック Saikikku Tendō), is a character in Yu-Gi-Oh! OCG Structures and was a member of the Four Kings in Elementary School alongside Jukyu Goriki, Yami Kuroda, and Tsukiko Kuroda. 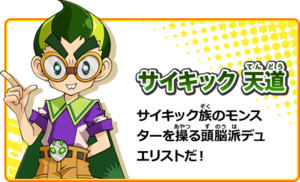 Saiko Tendo debuted in Chapter 5 of the OCG Structures Manga after Shoma Yusa finishes building the first version of his Immortal Phoenix Gearfried deck and demands to duel Shoma. Shoma agrees and proceeds to lose against the serious Tendo, who scoffs Shoma wanting to shake his hand. This is revealed to be because Tendo is participating in the National Qualifiers for the World Championship. He is later defeated in the finals by a direct attack from "Knightmare Unicorn" and admits that he wanted to accomplish a feat that the other Kings did not accomplish, but that this was his last chance. Defeated, Tendo is comforted by Jukyu and Kuroda and cries in Jukyu's hug.

Tendo later returns for the Team Battle event at the Satellite Shop as a member of Team Light and Darkness, the Two Sides of A Same Coin alongside Tsukiko and Kuroda where he duels Shoma in the finals.

Tendo's first shown Deck is a "Thunder Dragon" Deck, which he uses against Shoma and the first version of his "Immortal Phoenix Gearfried" Deck.

For the Team Battle event, Tendo uses an "Eldlich" deck against Shoma and his "Virtual World" deck.