Sanders is an antagonist in Yu-Gi-Oh! ARC-V. He is an instructor at Duel Academy who trained the Battle Beast. 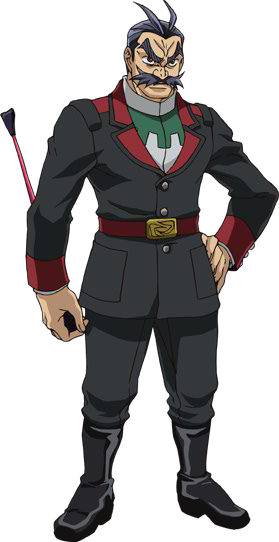 Sanders is a middle aged, fair-skinned man who sports a large messy mustache, thick eyebrows, and short black hair featuring two strands shaped like antennae similar to Yuri's. He wears a black military outfit with a red lining and cuffs over a close-collared white shirt that has a green pattern below the collar, giving the white beneath it the shape of battlements, and he also wears a maroon belt with a gold-plated buckle. He carries a red riding crop that he uses for intimidation.

Sanders is a serious and strict individual. He firmly believes in Duel Academy's agenda and teaches his alumni with a rigorous mindset. He has shown to be a strategic and methodical individual as he devised a trap to capture the Lancers and often remarking to his students the best course of action in battle depending on the mission at hand. He instructs his students to be completely obedient; anything less will not satisfy him, to the point of threatening the Battle Beast over seeing him smile in relief at avoiding a loss.

Sanders seems to be a man obsessed with war and strength as he pursues to create the strongest Duel soldiers ever. His enthusiasm is such that he refers to his students as gladiators and as their training grounds as a holy place, seeing no greater honor than in combat itself.

Ultimately, he is a man of Darwinist principles and cares little in sacrificing his own students or even having them battle each other, so long as his ultimate masterpiece, a soldier of utmost strength is born as a result. His principles are deeply ingrained in both his students and even himself, as seen when neither of them cared about Sanders himself being sealed into a card, and in fact encouraged it as a glorious sacrifice.

He tends to usher the catchphrase "Glory on the Academia".

Sanders trained the Battle Beast to become the strongest Duel Warrior, but his sheer hostility caused him to Duel and seal anyone he encountered into cards. Due to this, Sanders judged him defective and had him imprisoned.[2] 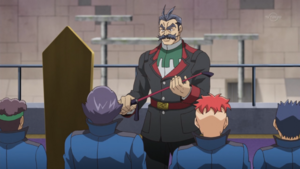 Sanders explains to his students that they will take part in a "Survival Duel".

When the Lancers landed on Duel Academy's north side, Sanders contacted the Professor and was told to carry out the mission according to the plan and take Yuya Sakaki down. He then gave a special mission to the elite students who have the top grades of Duel Academy: defeat the Lancers. The Lancers split up into two groups during the ambush, and Sanders told his students not to worry as it was part of the scenario and asked them how would they handle the situation. He was displeased when all of their plans focused on destroying them instead of capturing them, as were the orders, and he told them to watch carefully how to carry out a capture operation. Yuya's group were captured, and Sanders picked Ted, Ethan, Bernie, Jacob, and Emma to put their lives on the line in a Survival Duel against the five Lancers. (In the Dub, he instead asked for five of his students to volunteer and go up against the five Lancers in a Survival Duel). When the Lancers were brought to the arena, Sanders told them they would battle his five elite students until there was only one man standing. He told them the Survival Duel would create the ultimate soldier and the losers would become cards. He activated the Field Spell "Predaprimal Jungle" and started the Survival Duel. He told the rest of the students to burn this Duel into eyes as they would witness the birth of the ultimate soldier. One of the students was quickly defeated, and Sanders realized that this was the work of the Battle Beast and commented how he was as haphazard as ever, though he reassured himself that the elites would definitely make it.[1] However, Emma and Jacob were defeated, and Sanders was outraged that his top elites were wiped out and couldn't surpass the Battle Beast. Crow Hogan revealed the Battle Beast's identity, and Sanders told everyone that this was the strongest Battle Beast that he had grown, BB. He told his students that Battle Beast was very hostile and would sealed anyone he Dueled into a card, causing him to be judged defective and imprisoned. He also told them that he was planning on molding them into the strongest Duelists, but there was no result after his chosen five were defeated, and he suggested that if they didn't want to be sealed into cards like the first five were, they should watch the Duel closely. He was unimpressed by Gong Strong's Pendulum Summon and claimed that they had awakened the monster that was battle hungry. He was surprised when Jack Atlas arrived in the arena.[2]

He asked Jack if he was one of the Lancers' comrades and told him to show that confidence he has against the Battle Beast. Jack almost defeated the Battle Beast, but he was held back buy his own card restrictions and the Battle Beast smiled in relief at escaping defeat. Sanders was infuriated, and he joined the Duel, receiving an intrusion penalty. He used "Test Fusion" to Fusion Summon "Gladiator Beast Tamer Editor" and used the effect of "Tamer Editor" to Special Summon "Gladiator Beast Andabata" from Battle Beast's Extra Deck to his field. He told Battle Beast to fight freely now and show his strength and viciousness to the enemy as it was a direct order from the Professor to eliminate the Lancers; especially Yuya Sakaki. He tried to use the second effect of "Tamer Editor" to destroy "Scarlight Red Dragon Archfiend", but Jack prevented it with "Red Armor". Instead he attacked Yuya directly and told Battle Beast to prevent him from getting an Action Card, but the Battle Beast simply stood there in shock. Yuya dodged the attack with "Evasion", and Sanders yelled at Battle Beast for not following orders, stating the superior officer's orders were absolute on the battlefield. He told the rest of his students to engrave it into their hearts, as absolute obedience was his cardinal rule. The Battle Beast used "Gladiator Beast Assault Fort" to protect himself, and Sanders told him to bury Yuya and Jack, but yelled at him again for ignoring orders again and threatened to seal him into a card. To his utter shock, the Battle Beast used the effect of "Tamer Editor" to destroy itself.[3] 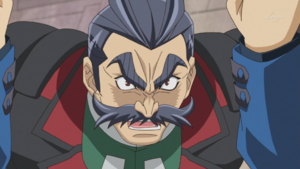 Sanders is dragged away by his students while he screams at Yuya.

He is then defeated and got mad at Battle Beast for attacking him too. He listened to Yuya and Battle Beast's talk about their similarities and told Battle Beast to seal him because he can teach his students how harsh a real battle can be. But, before doing so he told Battle Beast his goal about creating the strongest Duel solider in order to carry out the Professor's order to eliminate Yuya. He then told Battle Beast to seal him and eliminate Yuya as it is the Professor's order and told him that he won't survive if he fails. When Battle Beast's "Forts" failed, Sanders was angry that Battle Beast failed to win the Duel with his trump card. Sanders called Yuya an idiot for destroying his monsters due to the effect of "Great Fortress" and he'll meet his end as well. However, he learned that Pendulum Monsters don't go to the graveyard, making the effect of "Great Fortress" useless, shocking him. Sanders told Yuya that the Professor's next assassin will send him to his doom as his students take him away.[4]

Like Battle Beast, Sanders runs a "Gladiator Beast" Deck, which is focused more on traditional Fusion Summoning, and it includes the "Test" support monsters.