Sarina, known as Mizuchi Saio ( Saiō Mizuchi) in the Japanese version, is Sartorius's younger sister, and a miko. 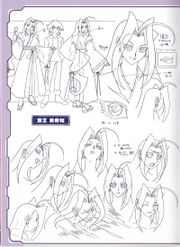 Sarina's designs incorporate multiple layers of clothing and a wide range of expressions. Depicted here is Sarina in full regalia from front and rear alongside views of her head from different angles and details of her lips, eyes and height in comparison to Jaden.

Sarina's character designs were overseen by Kenichi Hara. Sarina wears the ceremonial red and white clothes of a miko with sandals. Her dark hair is elaborately arranged in a flowing ponytail behind her, with the bangs closest to her face positioned on the outermost edges of her head; she also wears round earrings. She carries an Academy-issued Duel Disk on her left hand.

Sarina wields supernatural powers like predicting the future, just like her brother. She can materialize Duel Monsters, bestow special abilities onto others, teleport herself and others, trap people in her mirrors, create a spiritual barrier around a whole city, and even duplicate herself.

Sarina is the sister of Sartorius, and the leader of the Light Brigade. She first sent the first two members of her brigade (Frost and Thunder) after Syrus and Hassleberry; in the end, Frost defeated both his partner and his opponents (using a card Sarina gave both he and Thunder that Thunder couldn't use). When Frost returned, he was intending to duel Jaden himself; but Sarina, unimpressed with Frost's close-call victory, sealed him and Thunder in a mirror. She then sent T-Bone and Blaze to find and defeat Jaden; but she sealed Blaze away when they found him, and despite infusing Frost's, Thunder's and Blaze's powers into T-Bone's Deck, T-Bone lost and was sealed away.

After disposing of her subordinates, she challenged Aster and Jaden to a Tag Duel in KaibaLand's virtual system but was ultimately defeated. Sarina then revealed that she wished to save her brother from the influence of an evil aura housed in a Destiny Hero card that was shown to him when they were younger.

In a final act of gratitude she helped those trapped within the virtual world to escape but was left behind in the collapsing program, digitizing herself to act as her brother's "guardian". While no mention of it is made in the English adaptation, the Japanese version further includes a promise by Solomon Muto to speak with Seto Kaiba in the hopes of restoring her consciousness.

Sarina returns near the end of the second year to contribute to the satellite's demise. Afterward she is flown in to Duel Academy via helicopter by Kaiba's associates and reunited with her brother.

She is captured by Nightshroud under unknown circumstances in order to force Sartorius to accept the power of darkness. He corners and duels Jaden in order to save his sister but she appears to Jaden and urges him to defeat her brother.

Jaden does so, overcoming Sartorius's card "Arcana Force 0 - The Fool" that he placed in Jaden's Deck and he is reunited with his sister in the World of Darkness. They are both revived when Jaden defeats Nightshroud. After that, she was present at Jaden's graduation ceremony.

Sarina plays a Mirror Deck. Each of her Silver Spirit (shikigami) monsters is paired with another. She uses their effects to constantly revive them from the Graveyard, to activate either "Mirror Bind" or "Full Moon Mirror".

Once 10 counters have been placed on "Full Moon Mirror", she is able to activate "Infinite Fiend Mirror" to summon 9 Dark Creator Tokens" of her powerful "Dark Creator" to the field.

The concept of Sarina's cards is derived from onmyōdō, with Sarina herself taking on the role of an onmyōji.