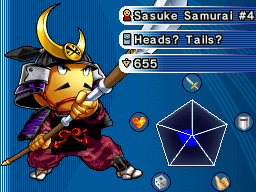 Sasuke Samurai #4 is a Level 2 Theme Duel opponent that challenges the player to win 5 coin tosses in a row during a duel against him.

Sasuke Samurai #4 appears as a Tag Duel opponent, partnered with Snipe Hunter. They are unlocked by defeating Figaro and Corse in Tag Duels 10 times.