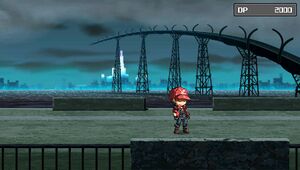 Satellite Bay, or simply the shoreline (湾岸), is a coastal area in Satellite.

Daedalus Bridge is located here. Crow's hideout is nearby.

Rex Goodwin arrived at the shoreline one day. None of the residents at the time knew who he was or where he came from. He used to stare across the waters dividing Satellite and New Domino and eventually started to build a bridge. Initially people thought he was crazy, but came to help him after seeing his progress and determination. Some people frowned at the idea and forced construction to halt. Goodwin became wanted by Sector Security and his helpers abandoned the project. While chased by Security, Goodwin rode his Duel Runner along the incomplete bridge and ramped into the sea. Unknown to the residents, he survived and got to the city. The bridge came to be known as Daedalus Bridge.[1]

In Yu-Gi-Oh! 5D's Tag Force 4, Larry (called Lenny in the game) hangs out at the shoreline.