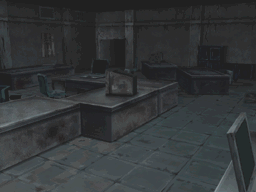 The front room of the lair.

In Yu-Gi-Oh! 5D's World Championship 2009: Stardust Accelerator, there is a building that serves as a lair for a group of thugs in Satellite. Initially the player is refused entry to the building.

Blitz finds a cheap deal for a Duel Runner off Kuroe. He takes the player to Kuroe, who offers it to him for 1000 DP. At this stage of the game, the player shouldn't be able to afford this and must face other Duelists to earn more DP. After buying the Runner, Kuroe arranges to have it delivered to the subway.

Upon returning to the subway, the player and Blitz discover the Duel Runner is missing an engine and CPU. Blitz returns to Kuroe to complain, but is confronted by two thugs, who drag him into the lair.

In their mission to rescue Blitz, the player confronts Kuroe at the door. Kuroe refuses to co-operate unless the player can defeat him in a Duel.

After defeating Kuroe, he tells the player, Blitz is inside and unlocks the door to the building, before running off.

Inside the building the player meets Ida, who orders them to leave or Duel him. After losing, Ida confesses that Blitz might have been here.

Inside the room, the player can find "Rush Recklessly" in a box in the bottom left corner of the room.

After defeating Ida, Kameno appears in the room, as he heard noise from the player. He reveals Blitz's location to be the back room of the building, but is certain the player wont get a chance to go their as they must Duel him first.

The next room is filled with light boxes, blocking the player's path. To advance to the next room, they must push the boxes to clear a path.

One possible way of passing the containers is to:

If the boxes get stuck, the player can press "Y" or exit and re-enter the room to start over.

After passing the containers, the player enters the room, where Blitz is. Blitz apologizes for the trouble, he's caused and leaves.

Inside the room, there is a box containing the card, "Quillbolt Hedgehog".

The containers must be passed again to get out. One way of clearing them is to: