Saya Sasayama, known as Sayaka Sasayama (サヤカ Sasayama Sayaka) in the Japanese version, is a character in the Yu-Gi-Oh! ARC-V anime. She is a friend of Allen Kozuki, Kite Tenjo, Shay Obsidian and Lulu Obsidian, and she is a surviving resident of Heartland in the Xyz Dimension and a member of the Resistance's Clover Branch.

Saya is a bespectacled young girl with blue eyes and short light-purple and lilac hair that is restrained by light green and orange hair clips that resemble bicycle helmets. Saya wears a light blue dress with a teal turtleneck under a tan dress held up with brown shoulder straps and a blue belt that has a golden symbol resembling twin birds back to-back and green and orange pouches at both hips. She also wears brown tights, white finger-less gloves, white leg warmers with teal cuffs and straps, and light-orange shoes with green soles. Unlike many of her friends, Saya did not change her outfit after the invasion of Heartland.

Saya has shown herself to be kind and caring; handing out soup rations to people despite not being on shift at the time. Allen claims that Saya is quite shy. Saya learned Yusho Sakaki's philosophy of Dueling with smiles from him, a philosophy that she passed on to Lulu, who subsequently passed it onto Yuto.

Saya views herself as cowardly due to her hesitation allowing Yuri to capture Lulu, and she later Duels the Tyler sisters alongside Allen in an attempt to correct her mistake. Due to her experience with the invasion, she is scared of "Chaos Ancient Gear Giant", the monster that caused the destruction of her homeland. Saya tends to blame herself heavily for her mistakes and deeply regrets them.

Lulu and Saya before the attack.

Before Duel Academy's invasion, Saya, together with Allen Kozuki and Kite Tenjo, were students of Heartland Duel School's Clover Branch studying under Yusho Sakaki's guidance, who was a teacher at their Branch.[1] Saya was friends with Lulu Obsidian[1][3], a student of Heartland Duel School's Spade Branch. She once defeated Lulu in a Duel and tried to give her a "Little Fairy" card, but Lulu's brother Shay was angered by Lulu's loss and slapped the card away. Saya shared Yusho's philosophy of Dueling being used to bring smiles to people with Lulu.[1]

One day, Duel Academy attacked and nearly annihilated the entire population of Heartland City. During this invasion, Yusho suddenly disappeared, leading them to believe that he had abandoned them.[1] Saya witnessed Lulu's kidnapping at the hands of Yuri, frozen in fear and unable to help.[3] While Shay and Yuto went to the Standard Dimension to look for Declan Akaba, the Resistance continued to fight. Despite their best efforts, both the Spade and Clover branches were nearly wiped out by the Tyler sisters, forcing them into hiding.[1]

While Yuya and Kite were Dueling and Kite mistook Yuya for Yuto, Saya, Shay, and Allen arrived and cleared up the misunderstanding. They attempted to convince Kite that the Lancers were comrades, but he refused to rejoin them and disappeared.[2]

Back at their hideout, Saya helped in distributing food for the refugees even though it wasn't her shift. Allen told her not to overwork herself and told her to rest, and Saya reluctantly relented. Saya listened to the Lancers' discussion and revealed that Kite's entire family had been sealed into cards by Duel Academy while Shay and Yuto were away. While Yuya lamented over this, she remembered Yuya's last name and asked if he had any connection with Yusho, explaining that Yusho was their teacher and disappeared during the invasion, and Allen believed that Yusho has abandoned them.[1]

Allen and Saya left the hideout in search of Kite. They eventually found him hunting Duel Academy Duelists. He told them to stay out of his way and sealed the Duelists into cards, ignoring Allen telling him how worried Saya was for him. Shay arrived and confronted Kite in a Duel. During the Duel, Allen and Saya learned about Action Cards from Sylvio when Shay used one. She also learned that Yuto was sealed inside Yuya when he revealed a memory only they knew. After Shay was defeated, Kite was about to seal him in a card before Saya begged Kite to stop, sobbing that she couldn't bear to lose Shay as well. She revealed that she had been present during Lulu's kidnapping by Yuri, but was too scared to intervene. Kite spared Shay, and departed.[3]

Later, while she was serving food to the survivors in their hideout, Saya began thinking back to what Shay told Kite about comrades. Deciding to find Kite and bring him back to them, Saya abruptly ran off. While running through Heartland, Saya ran into Gloria and Grace, two Duelists from Duel Academy who believed her to be a Lancer. They declared their intention to defeat her and seal her into a card, but Allen arrived and told her to run. Saya refused to ran away again, so Gloira and Grace suggested a Tag-Team Duel, and Saya accepted. Saya Xyz Summoned "Fairy Cheer Girl", powered it up, and attacked Gloria's "Amazoness Queen" but its effect protected it from destruction in battle. She Set a card and ended her turn without using the effect of "Cheer Girl" to draw a card, prompting Allen to call out her mistake. Saya apologized, and Allen quickly reassured her that he'd make up for it next turn. To their shock, they learned that their opponents were the Tyler sisters, who had devestated the Spade Branch of the Resistance, and Grace put pressure on them with "Amazoness Pet Liger". Saya apologized to Allen for being a burden but Allen reassured her that they hadn't lost yet. Unfortunately, the attack of Allen's "Heavy-Armored Train Iron Wolf" was negated by "Liger". Rememberin the effect of "Cheer Girl", Saya told Allen to use its effect, which Allen used to draw "Limiter Removal". Despite the increased ATK, the Tyler sisters reflected the damage with the effect of "Amazoness Swords Woman", but Saya activated "Fairy Rail", turning the damage into ATK for "Cheer Girl" and allowing Allen to make a comeback. However, they were both defeated when Gloria Fusion Summoned "Amazoness Empress", which allowed the twins' "Amazoness" monsters to inflict piercing damage. Just as Saya and Allen were about to be sealed into cards, Gong and Sylvio arrived.[4] Their would-be rescuers were also defeated by the Tyler sisters while Saya remained unconscious. She woke to see Yuya and Shay Dueling the Tyler sisters as they gained LP with "Amazoness Hall". She and Allen listened as Shay and Yuto (through Yuya) told the Tyler sisters that the Resistance didn't give up. Saya was amazed by Yuya's Dueltaining and how they defeated the Tyler sisters.[5]

Saya, Allen, and the Lancers watched the Duel between Shay and Yuya against three Obelisk Force members that pursued them. The Obelisk Force Summoned "Chaos Ancient Gear Giant", triggering painful memories of the monster from when it had destroyed the city, and Saya fled in fear. Unwittingly, she put herself in danger when the attack of "Chaos Giant" damaged a nearby building. Fortunately, Shay saved her, but he collapsed from his injuries. Kite showed up and helped Yuya defeat the Obelisk Force, but they were surrounded by more students led by Aster Phoenix, the Commander-in-Chief of the local Duel Academy forces.[6] Aster's squad began to surround Saya, Allen, and the Lancers, but Kite defeated them, allowing everyone to escape while Yuya Dueled Aster.[7]

Saya and others made it back to their hideout with Shay and watched over him while the Resistance went back for Yuya. They learned that the Duel Academy students in Heartland had decided to abandon Arc Project and help rebuild Heartland to atone for what they had done. Allen expressed his concern over their decision to let them help but Saya told him they had the best medical care at their headquarters. She was surprised when Kite admitted his mistakes when he saw Aster doing the same. Aster revealed that there was a way to restore the people who had been sealed into cards, but they would have to retrieve them from Duel Academy. Saya encouraged Kite to save his family and Lulu while Shay recovered. She also gave Kite a card to help him save Lulu in her place.[8] 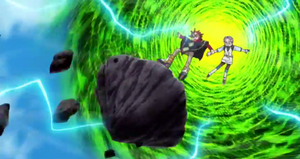 Saya and Allen are sucked through a dimensional rift.

A dimensional rift opened in Heartland, through which Saya saw a massive dragon, which Saya theorized to be a Duel Monster.[9] More dimensional portals opened and started to pull people into through, and Saya and Allen about were sucked throughdue to Saya getting distracted by the sight of Shay and Kite Dueling on the other side of the portal. They woke to find themselves in the Fusion Dimension, watching Shay and Kite's Duel. Saya was amazed when Shay and Kite both used "Rank-Up-Magic Limit Over Force" to Rank-Up their monsters without knowing what the other had. Unfortunately, Kite and Shay's opponent, who Kite and Shay referred to as Yuto and Yuya, used the effect of his "Supreme King Dragon Dark Rebellion" to reduce the ATK of Kite and Shay's monsters to zero. Before Saya and Allen could witness the climax of the Duel, another portal opened and transported them to another dimension.[10]

Saya and Allen found themselves outside You Show Duel School, and then they noticed a rock with their fallen Resistance comrades floating past, realizing that their comrades had been freed. Saya was surprised to learn that Z-ARC, the Duelist who had been Dueling Shay and Kite, was Yuya.[11] Declan Akaba joined the Duel and managed to deal damage to Z-ARC, and Saya and Alen told him to deliver their thoughts to Yuya. However, they were surprised when they thought "Supreme King Z-ARC" had killed Declan.[12]

Yuya arrived in the Xyz Dimension following the battle against Z-ARC, and Saya told Yuya that Shay went to look for Lulu in the Fusion Dimension. She watched Yuya and Dennis McField's Duel and was surprised by Dennis' Rank-Up and Yuya enduring the repeated attacks of "Performage Trapeze High Magician". She applauded at the end of the Duel when Yuya won.[13] Saya is later seen watching Yuya's Duel against Jack Atlas with Gloria, Grace, Mamoru, Aster, Allen, and Kite. Saya was pleased to see Yuya Sumon Yuto's "Dark Rebellion Xyz Dragon" at the climax of the Duel,[14] and when Yuya won. Saya subsequently watched Yuya and Declan's Action Duel. Saya was surprised when Yuya summoned the Four Dimensional Dragons in one turn and worried when he was about to be attacked.[15] She was particularly amazed by "Odd-Eyes Venom Dragon", comparing it to blooming flowers. Saya was surprised when she thought Yuya defeated Declan and noted how Yuya was smiling after he used the effect of "Performapal Five-Rainbow Magician" to lower their monsters' ATK to zero. Saya was happy for Yuya when he won, and she was subsequently sent to the Pendulum Dimension by Ray Akaba to witness her revival as Zuzu Boyle.[16]

Saya uses a "Fairy" Deck which focuses on defensive tactics, such as damage negation, and is spearheaded by "Fairy Cheer Girl".