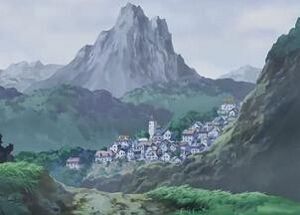 Schwank[1] is a town in the Duel Monsters Spirit World.

Duel Monster Spirits lived in harmony in Schwank before the Monkey King Zeman appeared in the spirits' world.[2]

Zeman managed to capture all the townspeople apart from some Spellcasters, who were turned into children by the Minus Curse. Cursed Needles were scattered throughout the town, causing many strange phenomenona.[2]

Luna and Kuribon entered the town during Luna's mission to save Ancient Fairy Dragon. The townspeople were afraid of her and ran as she approached them. After Zeman's troops appeared in the area, one of the spirits, Torunka helped Luna hide. The two of them managed to escape and left in search of Regulus.[2]