Scritch, known as Kaninja in the Japanese version, is a character in the Yu-Gi-Oh! ZEXAL anime who is a Barian belonging to the Fearsome Four of the Dark Dueling World. 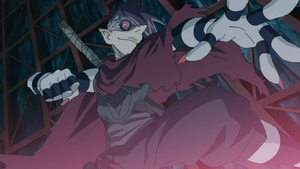 Scritch is a man of small stature who wears ninja-clothing, including a cape, a sword and goggles.

In his Barian form, he is a black mosquito-like humanoid with distinctively round eyes with ripples. His mouth and nose now resemble the needle-like mouth that a mosquito possesses.

Attributed to his insect motif, Scritch dislikes big things, as such he's a firm believer that being bigger is not synonymous of being better. He also demonstrates certain pride on his "Number" which is diminutive in size but large in destructive power. Like the other members of the Fearsome Four, he's not above cheating in his Duels. Scritch also has the habit of adding "ka" to his sentences.

Scritch has the ability to transform himself into a small mosquito. In this form he can fly and sting people, being capable of injecting an hallucinating poison that can make the victim believe the friend is the foe and vice-versa. Like other members of the Fearsome Four, he's capable of summoning a Barian Emblem in order to halve the Life Points of his opponents and add that value to his own.

"Ka" means "mosquito". "Scritch" is derived from "scratch", which is a reference to how mosquito bite victims tend to scratch the areas where they were bitten.

Scritch was once a human who worked with Mr. Heartland as a Dueling criminal until he died. He was later reincarnated as a Barian.[1]

After Erazor's failure to defeat Yuma Tsukumo and Chironex's failure to defeat Reginald Kastle, Mr. Heartland decided to send Scritch to investigate Kite Tenjo, who disappeared from Heartland City. Taken the form of a mosquito, Scritch observed Kite's conversation with Yuma and Tori regarding Astral, and proceeded to inflict a hallucinative poison on him, unknown to Yuma. Later, he attempted to prevent Kite and Quinton from sending Yuma off to the Astral World and initiated a Duel with the two.[2]

Using the effects of "Number 2: Ninja Shadow Mosquito" and the poison that he had injected Kite with earlier, he gained a significant advantage, causing Kite to think that he was Quinton and vice-versa, resulting in Kite defending Scritch. Quinton was able to break Kite free from the hallucination, allowing Kite to make a comeback and defeat Scritch with a single attack from a powered up "Galaxy-Eyes Photon Dragon", causing him to vanish as Erazor and Chironex had and relinquishing his "Number" to Kite[3]