Sect Ijuin ( セクト, Ijūin Sekuto) is a character from the Yu-Gi-Oh! 5D's manga. He is one of Yusei's closest friends from Satellite, but sided with the Skeleton Knight after acquiring the Duel Dragon, "Archfiend Dragon Beelze".

In Japanese, last names are said before first names, making him "Ijuin Sect", which contains the term "insect".

In the Japanese version, Sect has a habit of saying アリ (ari, the Japanese for "ant"). According to an omake (joke) from volume 1, this is because Sect once played an "Ant" Deck. This habit is completely removed in the English version.

Sect is quite small, having a similar height and appearance to Leo[2]. Sect originally wore a white biker outfit with a blue pattern and a helmet of a similar design. He also wore a pair of goggles on his helmet and a crimson scarf. After siding with the Skeleton Knight, Sect wears black and gold medieval armor and a red cape, similar to that worn by The Supreme King. Sect also has brown hair and blue eyes. After Summoning "Archfiend Dragon Beelze" his skin began to crack, leaving scars across his face.[3] His skin healed after he Summoned "Archfiend Uber Dragon Beelzeus" for the first time, but his scleras turned black.[4]

Sect's Duel Runner is in the shape of an ant, referencing his Insect Deck. Sometime after his Duel with Jack Atlas, Sect received a new, more modern Duel Runner with a sleek design. 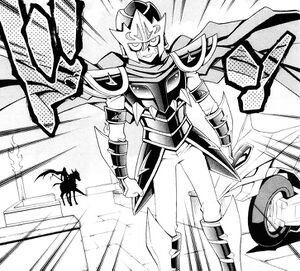 Sect corrupted by the darkness

Sect was originally a fun person, believing that Duels were fun, even when he lost. After acquiring his "Duel Dragon", he became quite secretive, hiding it from Yusei. He also has a tendency to get into arguments easily, seen when Crow Hogan pushed him aside and getting angry at him (Crow) for it, calling him "M-Head," as a reference to Crow's M-shaped criminal mark. After being affected by its Shadow Miasma, Sect's personality became dark with him believing that Yusei looks down on him rather than seeing him as a rival. During his Duel with Akiza, Sect mocked her throughout the Duel, especially when she wrongly predicted the turn he'd lose.

Sect challenges Yusei Fudo to a Turbo Duel, in a Satellite factory, in the hopes of defeating him. Yusei wins, but is impressed by Sect's performance and accepts Sect as his rival.[5]

After the Duel, Sect climbs up on top of a tank and, following an urban legend, holds two cards up to the sunset. He clasps them together and prays that the Skeleton Knight will give him rare cards to use to beat Yusei. The Skeleton Knight appears, but refuses to give cards to someone this weak. He takes Sect captive and knocks him out. The knight challenges Yusei to a Duel in order to save Sect.[5] During the Duel, Sect wakes-up and starts cheering for Yusei.[6]

Yusei takes Sect on the back of his Duel Runner to bring him to the hospital. However, Yusei is forced into a Turbo Duel with Jack Atlas on the way.[7] During the Duel, Sect falls off Yusei's Duel Runner. Yusei abandons the Duel to save him and both of them fall into a body of water.[8]

Yusei manages to get Sect to Puzzle Hospital, where he is treated for a minor concussion.[9]

While Sect is in the hospital, the Skeleton Knight appears to him in a dream. According to the ancient edicts, the knight says that he shall grant Sect's wish. Sect wakes up, frightened, but finds himself holding a card.[10]

Sect arrived at the stadium of the D1 Grand Prix, wearing a poncho, shortly after Yusei started his Duel with Greiger. Sect urged Yusei to show everyone the outcome of his special training. Akiza Izinski approached Sect over this and asked if he was with Yusei. Sect was shy at first, wondering if Yusei knew this pretty lady. He acted tough and said that he is Yusei's rival. He was shocked when Akiza correctly guessed that Yusei's new training meant he had developed a new Sense.[11] 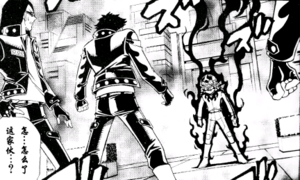 During Yusei's Turbo Duel with Hunter Pace, Sect overhears some of Hunter's goons joking about them taking Yusei's turbo chip out of his Duel Runner so Hunter could win the race by overtaking Yusei. As this happened, Sect began to pick a fight with the goons and when they thought they were getting the upper hand, his "Archfiend Dragon Beelze" began to infect him with pure darkness that gave him enough strength to defeat Hunter's three goons.[12]

After this, he disappears without a trace. After hearing about these events, Yusei began to look for him throughout the city, as Sector Security were looking for him in order to place him under arrest. Lazar observed these events and informed Rex Goodwin that Sect has a shadow card. Overhearing their conversation, Jack Atlas walked out and began to look for Sect, claiming that he wanted his shadow card.

After these events, Sect rode to the harbor on his Duel Runner, trying to escape from all of the attention his fight had brought up, only to be cornered by Jack, who challenged him to a Turbo Duel. Suddenly, the shadow card began to infect Sect again, and both prepared for a Duel of darkness.[13]

During the Duel, Yusei Fudo drives in between him and Jack, causing Sect to snap out of his dark manner for a short while. However, after Summoning "Beelze", he begins to think that Yusei is looking down upon him and making fun of him because he was weak. 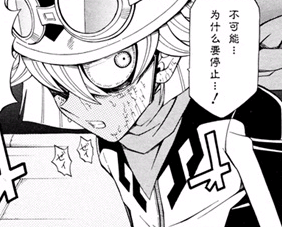 Sect's skin begins to flake off.

As the Duel progresses, Sect becomes more and more consumed by the shadow card, even to the extent of having his skin begin to flake off, showing that the shadow card carries some form of curse. During the Duel, Jack gains a massive upper hand by Summoning "The King of Divine Punishment, Dark Highlander", but shortly after this happens, the Skeleton Knight appears and takes Sect with him, ending the Duel and leaving Jack and Yusei shocked at what just happened.[14]

Later, as the second stage of the D1GP takes place, Sect Duels Akiza under the Skeleton Knight's orders.[15] After winning against Akiza, Sect takes her with him into the Aerial Fortress Sebial.[16] And is currently waiting in the center of the fortress according to the Skeleton Knight.[17]

After Sect senses that the duels in the northern and southern corridors are over, he wonders who will be his opponent. Heading down to the Watchtower of Sky's Lock, he discovers Yusei and Jack there. Dueling against Yusei, he reveals to him that every time Yusei loses life points, Akiza will get hurt in the process.[18]

After Yusei manages to destroy his Duel Dragon, Sect returns to normal. However the Ultimate God begins to awaken but Sect reveals a way to stop it and tells Yusei about the Light Sense.[19] Working together with Yusei, he and Sect use the "Cross Sense Final Session" and seal away the Ultimate God.[20] Afterwards, Rex Goodwin appears and reveals his plan to resurrect the Ultimate God. Sect protests that they sealed it away but Goodwin informs him that he has the God's Shadow Miasma within him. After Goodwin absorbs the remaining miasma from the Ultimate God he proceeds to absorb the energy and cards from all the duelists in the area including Sect himself.[21] When Sect learns that Yusei is the only one that can duel Goodwin he is confident that Yusei will find a way to win.[22]

Sect originally saw Yusei as an older brother figure, occasionally calling him "aniki" (big brother in Japanese). He believes that Yusei is an awesome Duelist who deserves to win all. After Sect became an ally of the Skeleton Knight, his once friendly outlook on Yusei turned sour, as he now believes that Yusei looks down on him as a weak Duelist. 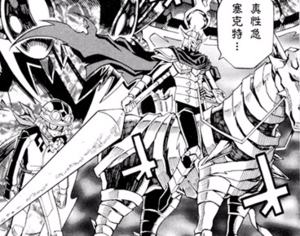 Sect with the Skeleton Knight.

Sect uses an Insect Deck. After siding with the Skeleton Knight, he begins to incorporate the "Hell" archetype, also using several cards which reference "Death" such as "Fruit of the Dead". He also uses various methods to swarm Synchro Material Monsters so he can Synchro Summon "Archfiend Dragon Beelze" with ease through cards such as "Call of the Haunted" and "Hell Summon".

An omake in volume 1 revealed Sect originally played an "Ant Deck". However, he later changed it to a general Insect Deck because ants make weak enemies. His ace monster was "Hammerhead Ant".