The Security chief is a character in Yu-Gi-Oh! 5D's. He was in charge of a branch of Sector Security sent to Satellite to control crime related to Duel Gangs. Later on he became Trudge's boss.[2] 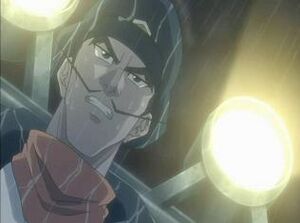 He faced a Satellite Duelist, who used "Skull Knight #2" and Summoned "Assault Dog". "Assault Dog" destroyed the Duelist's monster and proceeded to mercilessly attack him.[3]

He led Sector Security in their battle with The Enforcers, which ultimately led to the team disbanding. After Kalin Kessler, who viciously assaulted Security in the battle, was captured, Kalin spotted the officer patting Yusei Fudo on the shoulder, causing him to believe Yusei was a snitch.[3]

Years later, he served as a senior officer in Sector Security in Satellite, being Tetsu Trudge's boss. After Trudge lost to Yusei, he gave Trudge a new Deck and commented on how Trudge payed for the allegedly stolen parts with his own salary. Trudge replied that it was his pride as a Duelist and the chief reminded Trudge that he is a member of Security before he is a Duelist (in the dub, he told Trudge that he would rather have demoted him to handing out parking tickets, but Jack had ordered him to give Trudge another chance.)[4]

The only card seen in his Deck is "Assault Dog".