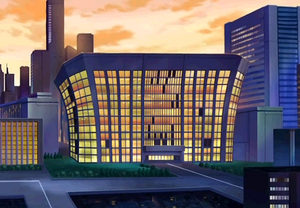 Security storage warehouse is a building located in Neo Domino City with a primary function of storing property seized by Sector Security.

After Yusei Fudo was sent to The Facility, his Duel Runner and Deck were stored here.[1] After being released from The Facility, Yusei sought out Blister who gave him a disguise and a Fake Security ID which would allow Yusei access to the building. That night, Yusei hid away in the men's bathroom until everyone left and the building was closed down to begin his search. After finding his property, he was ambushed by Tetsu Trudge and several Sector Security officers. However he managed to get on his Duel Runner and escape shortly before Trudge began a Duel with him. During the duel, Yusei attempted to escape the building, but Sector Security had control over the door panels, and kept on closing them. Because of this, Blister ordered Yusei to drive into an elevator shaft.[2] 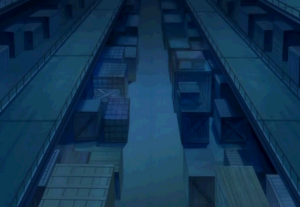 At this time, Blister set off some explosives, destroying the elevator doors which allowed Yusei to free-fall down the shaft. He then arrived in the building car park where he continued his Duel with Trudge.[3]

After the player is caught and sent to The Facility, their Duel Runner and Deck are stored here. The player locates Blister who gives them a Fake Security ID and a Security uniform to infiltrate the building. The player then has to careful navigate around several puzzles which are guarded by several officers who if they spot you, tell you to return to your post at the front of the building. After successfully finding his Deck and Duel Runner, the player has to race Tetsu Trudge and win in order to escape.