Senjome is a parody character based on Chazz Princeton, who is known as Jun Manjoume in the Japanese version.

Senjome frequently appears in V Jump alongside other cosplay characters, and participated in The Third Charisma Duelist Determining Fight Tournamen[1]

Senjome appears as an unlockable character in the Yu-Gi-Oh! GX Tag Force games.

Senjome appears at the Obelisk Blue Boys Dorm once the player has completed the game with at least three of the seven originally avaiable characters. He asks for the player's aid in his, Sironos' and Sanzyudai Yuki's feud against Emperor.Umiuma and the rest of UmiumaCorp. Should the player agree, after winning a Tag Duel with Senjome as their partner, he and his companions can be selected as partners for the Tag Force tournament.

Senjome can appear in a special story event at the Ra Yellow dorm, partnered with Inoso, if either Syrus or Tyranno has been defeated in duels at least 15 times. After defeating them, both Inoso and Senjome can be selected as tag partners.

Senjome appears as a downloadable Ghost Duelist for May 2010.

Senjome appears as a downloadable Ghost Duelist for August 2011.

In The Third Charisma Duelist Determining Fight Tournament, Senjome uses a Scrap Deck, whose contents were given in the issue.[1]

In the second and third installments, Senjome instead uses Dragon Decks featuring the "Armed Dragon" and "Horus the Black Flame Dragon" "LV" series. 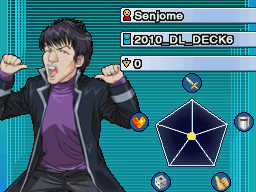 The earliest downloaded version of Senjome as a Ghost Duelist had him using this Deck due to a glitch. Another downloadable opponent, Neo Flamvell Origin, would use a similar Deck once it became downloadable in January 2011.

A while after that, Senjome's download was updated so that it used the intended Deck. 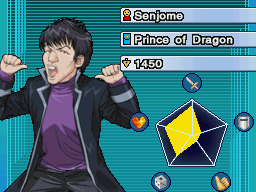 Senjome, in Reverse of Arcadia