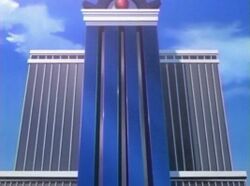 The Senrigan Group is a powerful corporation that sponsors Aster Phoenix.

The Group manufactured the card "Destiny End Dragon" for Aster. When the card was thought to be stolen, Aster's career was threatened. Aster temporarily lost his career after losing a bet that Chazz Princeton would win against Jaden Yuki; however, when the Senrigan Group recovered "Destiny End Dragon", they agreed to continue funding Aster.

The Group considers the Princeton Group their main rival company.

In Yu-Gi-Oh! 5D's, they are mentioned as a sponsor of the WRGP.