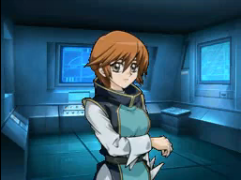 Seria in her Arcadia Movement uniform.

Seria is a member of the Arcadia Movement. She and Sayer perform tests on the player, with Seria ultimately deducing the player is communicating with the Spirit World. After the player wakes up, Sayer orders Seria to take them to their room and to make sure nobody realizes that the player is not a Psychic Duelist. She lends them a Deck and then leaves the player with Okita and Liquid.

Seria supervises more tests on the player later, and has to abort them at one point to stop Sayer from putting the player's life at risk.

When the Dark Signers attack the Arcadia Movement, she abandons the organization. By the end of the game, the player can duel her in the City, on the way to the Stadium.

Seria can be found in the Stadium.

After finishing the game, the player can assist Seria in a side quest to help her find a husband. 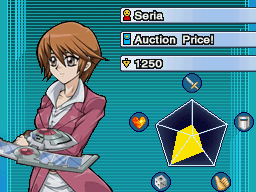