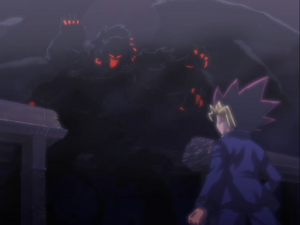 Seven-Armed Fiend appeared in a dream Yugi Muto had. He grabbed Yami Yugi and insisted that Yami belonged to him now, when Yugi demanded that he let him go. Yugi asked who he, to which he replied that it would all become clear in time, just as soon as Yugi joins the game. He laughed and flew away as Yugi asked what game he was referring to.[1]

Seven-Armed Fiend appeared in another of Yugi's dreams. He chased Yami Yugi, who merged his Duel Armor with Dark Magician. However the Dark Magician armor shattered almost immediately.[2]