From Yugipedia
Jump to: navigation, search
This article is about the character. For the Alignment, see Black Magic (Alignment).

Shadow is a mysterious character in the Yu-Gi-Oh! ZEXAL manga, working under Kyoji Yagumo. 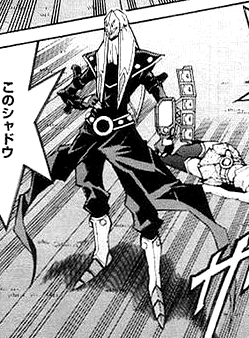 Little can be ascertained of Shadow's true appearance, though he appears to be a particularly tall man. His outfit consists of a long black coat with metal studs and other ornamentation and metal greaves, as well as gloves, which together cover almost his entire body. Like Yagumo's other henchmen Hishakaku and Eviluder, his face cannot be completely seen, but while the latter two wore masks only covering their mouths, Shadow swaddles his entire face in a large headdress, leaving only his eyes visible. 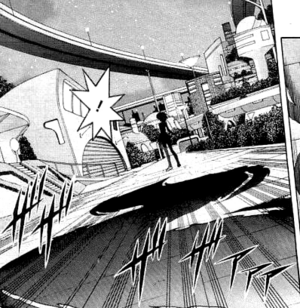 Shadow approaches Kotori in the form of a shadow.

Shadow is able to take the form of a shadow, which he used to spy on and capture Kotori. He also can make moving shadow items, such as a bird, which he used to send Kaito an invitation. Finally, he has shown the ability of disappearing instantly, which he did right after losing to Kaito and Shark, only leaving two cards behind for them.

After Hishakaku's defeat, Shadow was dispatched by Kyoji Yagumo to deal with both Kaito Tenjo and Ryoga Kamishiro by allowing both Numbers Hunters to defeat him, allow each of them to take a Number from him, and then pit the two against one another.[1]

Shadow had collected at least two "Numbers" besides his "No. 48: Shadow Lich", which he purposely lost to other Duelists in order to trap them - "No. 13: Cain's Doom" and "No. 31: Abel's Doom". His cards were eventually absorbed by Astral upon his loss to Yuma Tsukumo.

Shadow calls his Deck a Shadow Deck, which uses defensive strategies while burning the opponent.