From Yugipedia
(Redirected from Shadow Drone)
Jump to: navigation, search 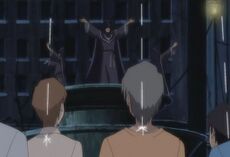 A group of Shadow Drones preaching.

The Dark Signer associated with Earthbound Immortal Uru has the ability to control spiders. That present day Dark Signer is Roman. By latching the spider onto a person, that person can be possessed.[2]

As a Shadow Drone, the victim's Deck is changed to that more fitting of a Dark Signer.[2] Such as including a Dark Synchro Monster. The Shadow Drone gains some Dark Signer powers, such as the ability to Shadow Duel. After losing a Shadow Duel, the victim and their Deck is returned to normal and they have no recollection of what happened while possessed.[1]

After the Fortune Cup, the Dark Signers turned a number of people in Satellite into Shadow Drones and dispatched them into the streets to preach that the Crimson Dragon is evil. While other people, including Grady listened, spiders were lowered onto them, in order to possess them.[1]

While visiting Domino General Hospital, Trudge comes into contact with a spider and gets possessed.[3]

The Dark Signers use Grady and Trudge to target Yusei Fudo and Jack Atlas respectively. Both Shadow Drones lose and are returned to normal afterward.[2][3]

Ultimately, the residents of Satellite were turned into Shadow Drones for a more sinister motive; To be used as sacrifices for Kalin's "Earthbound Immortal", "Ccapac Apu".

Trudge is turned into a Shadow Drone a second time, shortly after Yusei defeats Kalin. Through Trudge, Roman invites Yusei to come and face him. The spider then leaves Trudge, returning him to normal.[4]