Shadow Duels, known as Duels of Darkness in the Japanese version, are Shadow Games involving Duel Monsters. It causes the players to suffer real damage from the effects of any card played during the Duel.

The first Shadow Duel to occur in the series was Dark Yugi's Duel with Seto Kaiba in the manga, during which the monsters were materialized and the loser suffered a Penalty Game. Kaiba was defeated and subjected to the Experience of Death.

The next Shadow Duels took place between Yami Yugi and Maximillion Pegasus during the Duelist Kingdom arc. Pegasus Dueled Yami Yugi through a videotape and defeated him when the timer ran out before Yami Yugi launch a winning attack, capturing Solomon Muto's soul as a Penalty Game. The two later had a rematch as the prize of the finals of the Duelist Kingdom tournament, though it was not played as a Shadow Game until after "Toon World" was destroyed. This time, Yami Yugi was able to emerge victorious. Yami Yugi also played a Shadow Duel with Yami Bakura in the anime only, defeating him.

Despite the claims of deathtraps that would send the loser to the Shadow Realm in the dub, none of the Duels played in the Battle City preliminaries were Shadow Games. It was not until Yami Marik took over Marik Ishtar that Shadow Duels began to appear, and all of the subsequent Duels that he took part in were Shadow Duels, save the four-way Duel to decide the semi-finals match-up.

During the Dawn of the Duel arc, Yami Bakura took part in two Shadow Duels, though these differed between the anime and the manga; Dueling Seto Kaiba inconclusively in the anime and Jonouchi in the manga, in addition to Yugi Muto in both versions. Only his Duel with Yugi ended conclusively; the others ended with no result.

Jaden Yuki mentions that the King of Games, Yugi Muto, faced many Shadow Duels and triumphed; the fact that Yugi took part in Duels involving magic thus appears to be common knowledge in GX.[1] During Jaden's first Duel against Nightshroud, he realized that Shadow Duels really existed; having not believed in them prior.[2] Unlike the Shadow Duels in Yu-Gi-Oh!, which were invoked with a Millennium Item, these Duels were invoked by spirits of Duel Monsters or by Shadow Charms.[2]

Shadow Duels are damaging to the Duelists and the blasts from the attacks can be fatal and often cause damage even to the surrounding observers and area; Jack Atlas and Tetsu Trudge destroyed half a hospital. The Nazca Line shape around the area viciously tears up any objects in its path as it forms.

Many concepts similar to Shadow Dueling have existed throughout Yu-Gi-Oh! series, including the original Shadow Games of Duel Monsters, Dueling with the "The Seal of Orichalcos" and Psychic Dueling, as well as the technology at the disposal of Iliaster. Shadow Dueling is said to be similar to Psychic Dueling, but is much more powerful. However, unlike the past series, these Duels are never referred to as "Shadow Games." 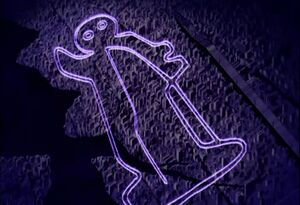 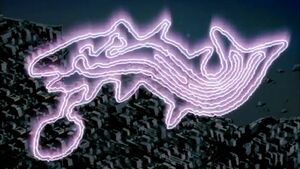 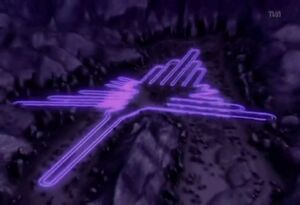 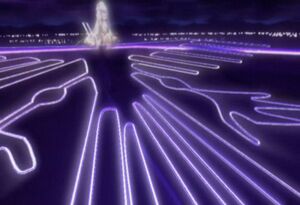 A Shadow Turbo Duel is a derivation of a normal Shadow Duel against a Dark Signer. It possesses all the characteristics of basic Shadow Duels, except that it occurs within the rules of a Turbo Duel. Like normal Shadow Duels, all impacts coming from monster attacks and effects are real. This results in the possible damaging of a Duel Runner as occurred to Yusei Fudo. During the Shadow Turbo Duel, the particpants use the geogylph as a course. Another consequence of this dangerous kind of Turbo Dueling is that wherever the surroundings of the area on which the Nazca Line geoglyph materializes are destroyed. As long as a Shadow Turbo Duel is occurring, the materialized attacks of either players' monsters often indirectly results in the devastation of any objects in close proximity, as seen during the Shadow Turbo Duel between Crow and Greiger.

The five Shadow Turbo Duels that have occurred have been Yusei Fudo's two Turbo Duels against Kalin Kessler, Crow Hogan against Greiger, Jack Atlas against Carly Carmine and Yusei, Jack and Crow against Rex Goodwin. However, in the last Shadow Turbo Duel that occurred between Yusei, Jack and Crow versus Rex Goodwin, Goodwin remained at the top of altar of the Stairway to the Dragon Star, while Yusei, Jack and Crow drove their Duel Runners on the track formed by Goodwin's Condor geoglyph. This is the only Turbo Duel so far in which someone is not on a Duel Runner or a Duel Board, but as with a Duel Board, as long as someone has a "Speed World" card they can use a Duel Disk.

In Yu-Gi-Oh! ZEXAL, Vector, in his past life, initiated a Shadow Duel (which he referred to as a "Shadow Game") against Shark/Nash, where whenever a player's monsters are destroyed also had their respective armies lose some of its warriors. Though Nash was victorious, his entire army was decimated due to the amount of monsters that were destroyed.[3]

Similar to Yu-Gi-Oh! 5D's, there are several other concepts similar to Shadow Duels in the series. The Baria Sphere Cube damages its occupants when they take damage inside it, and this effect is applied to the Earth when it begins to merge with the Barian World. The souls of losing Duelists in the latter are sent to the Barian World. Dueling is also more intense in Astral World, during which Yuma was blown off his feet simply after one of his Defense Position monsters was destroyed.

It is important to note that while the AR Vision technology can apparently cause shockwaves that can harm Duelists, the damage from the Shadow Duel between Vector and Nash proved far more dangerous as when either player took a hit in the Duel, the damage to the player was visibly more brutal.

In Yu-Gi-Oh! ARC-V, there is no direct mention of Shadow Duels, but some elements are utilized in the Action Duel concept, in which the use of Solid Vision causes monsters to be physically materialized and landscapes changed according to the Action Field selected. Real damage is inflicted through shockwaves, and although harmful, they are not shown to be lethal. Noteworthy is that Duelists are allowed to physically assault the opponent, although such practices are rare.

Shadow Duels were implied when Yuto and Shay Obsidian inflicted damage without the use of an Action Field; this is later implied to be a function of their Duel Disks and is seen commonplace through the remainder of the series. The most prominent method that strongly correlates with that of a Shadow Duel are the Duels initiated by members of Duel Academy or users of Human Sealing Technology, where the losing player is sealed in a card.

The only mystical elements to Duels seen in the series are when Z-ARC or his fragments Duel; the shockwaves that they can cause are far stronger than normal and have been conjured outside of Duels.