The Shadow Giant is a character appearing in the Yu-Gi-Oh! ZEXAL anime that resides in Astral's memories of the Door. 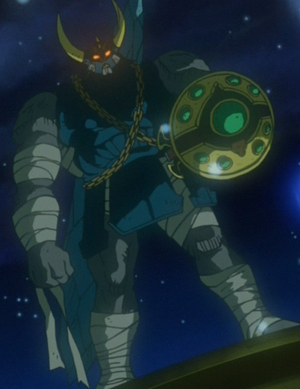 The Giant is covered in blue armor and has horns on top of its head. It also has bandages on its arms and legs, and chains across his torso. The Giant also wears a viking-like helmet that covers its face and glowing orange eyes. Its shield functions as its D-Pad.

The Shadow Giant speaks using plural pronouns, such as "we". This is omitted in the English dub. 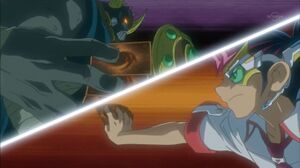 When Astral attempted to access more of his memories, the Door appeared and spoke to him and out of it came the Shadow Giant. The Giant claimed it would test Astral's worthiness to access more memories from the "Numbers". Using "Unformed Void" it was able to lock down Astral's "Numbers" and push Yuma and him into a corner.[1]

It was only with the intervention of Number 96 that Yuma and Astral were able to push through and win. With this, Astral recovered more of his memories and learned his original mission - to find the Numeron Code before the Barians do. He also learned that the knowledge of the Code's location was with the "Numbers" he had not yet collected. However, he was also forced to release Number 96 in order to do so[1]