From Yugipedia
Jump to: navigation, search
For the anime version of this game, see Dark RPG.

The Shadow RPG, known as the Dark RPG or Dark Role-Playing Game (・ Dāku Rōru Pureingu Gēmu) in the Japanese version, is the final Shadow Game in the Yu-Gi-Oh! manga.

When Dark Yugi entered the World of Memories to relive his past life as Pharaoh Atem, Dark Bakura commenced a Shadow Game. Using a diorama of the ancient Egyptian city as a game board and cards representing people and items, they controlled events happening in the World of Memories. Dark Bakura played with the intention of stopping Atem from defeating Zorc Necrophades in the replaying of his life and resurrect Zorc into the modern world. Dark Yugi played to regain his memories and defeat Zorc again.[1] 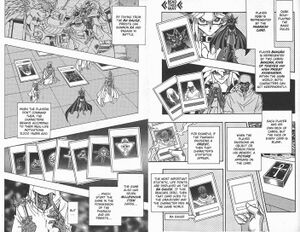 The game's main players were Dark Bakura and Dark Yugi.[1] Akhenaden's mummy, whose soul was one with Zorc Necrophades',[2] was considered to be a player on Dark Bakura's side. The game contained a number of non-player characters, including ancient Egyptian civilians and people from the modern world, who entered the game world.[1]

Each player was represented by a character card, with Dark Yugi's being the "Pharaoh" card and Dark Bakura's being "Bakura, King of Thieves" (his own character) and "Akhenaden" (Akhenaden's mummy's character). Each player had a deck of cards, which were initially blank. When a player envisions an item or remembers a person from their past, a picture of the item or person appeared on the card.[1]

Each character card contained stats, include a ba gauge indicating their life force. If a character's ba gauge empties they die. Most characters have a single bar as their ba gauge;[1] others, such as Zorc Necrophades, have multiple bars.[2] By paying ba, characters can summon ka and engage in battle. When characters are not given commands by their controller, they behave according to their own motives.[1]

The game featured seven Millennium Item cards, which at the beginning of the game are in possession of Dark Yugi's party, the pharaoh and the High Priests.[1]

Each player had a special ability.[2]

The Seal of Memories on Marik Ishtar's back contained a prophecy, "In the future, one will come who will wield the stone slabs of the three gods. By the gods shall you know him for it is he in whom the pharaoh's soul resides.". Ishizu Ishtar explained to Dark Yugi that the God cards were the modern equivalent to the stone slabs. While observing Marik's back, the God cards showed Dark Yugi a vision of the Tablet of Memories.[3]

Dark Bakura got his host Ryo Bakura to build an elaborate diorama of the Egyptian kingdom for them to use in the game. Since Bakura's father was the owner of Domino City Museum, Bakura had access to a hidden room, where the diorama was mounted on a giant table, shaped like the Millennium Puzzle. Akhenaden's corpse, which was to have some influence on the game once his soul was released from the Millennium Puzzle, was also placed in this room.[1]

Following the vision of the Tablet of Memories, Dark Yugi, along with Anzu Mazaki, Katsuya Jonouchi, Hiroto Honda and Ryo Bakura went to Domino City Museum, where the tablet was located. At the entrance, they were greeted by Bobasa,[4] who explained that Dark Yugi was to enter the World of Memories. Knowing Dark Yugi was going to relearn his real name, Anzu purchased a cartouche pendant at the museum's souvenir shop, so Dark Yugi could inscribe his name and not forget it again.[5]

Dark Yugi brandished the God cards before the tablet, causing him to leave Yugi's body.[6] When Bobasa explained that he was now in the World of Memories and re-experience his death, Yugi and his friends requested that they enter the World of Memories too to save him.[7] As a permission check, Bobasa used Millennium Scales to check for evil in their hearts, with only Bakura, due to the influence of the Millennium Ring. He took everyone else to Yugi's soul room,[8] where they searched for the entrance to the World of Memories.[9] They succeeded in doing so[10] and unbeknownst to them were followed by a portion of Dark Bakura's consciousness, which had been sealed in the Millennium Puzzle.[11]

While Yugi, Anzu, Jonouchi and Honda were in Yugi's soul room, their real bodies fell unconscious. Dark Bakura took them to the hidden room in the museum and placed them in coffins, from where they could act as non-player characters. He hung the Millennium Puzzle above the diorama, so that all the energies and souls within the World of Memories could be unleashed upon it and the Shadow Game could commence. When Dark Yugi had held the God cards before the tablet, a part of his consciousness also awoke the RPG table, outside of Yugi's body.[1]

Initially events in the game played out similar to how they did in the original course of events.[1] Dark Yugi relived his life as pharaoh, where he re-experienced his first Diaha with Bakura, King of Thieves,[7], the mock Diaha and Mahado's sacrifice.[12], during which he noting similarities between Diaha and Duel Monsters.[8]

When Yugi and his friends entered the World of Memories, Bobasa informed them of their mission to learn the pharaoh's name. He explained that since there were not truly part of this world, they were unable to interact with its people or items.[11] This prevented them from helping Kisara, who they witnessed being stoned, but she was saved by Seto, whom they recognized as looking like Seto Kaiba.[13] They heard him mention that the pharaoh was at the palace, so they followed him there, but the will of the pharaoh blocked intruders from entering.[14]

The portion of Dark Bakura's consciousness that entered the world as an NPC located Thief Bakura and laughed as he watched him execute the inn massacre.[14]

They Summoned the following ka, during the course of the game. 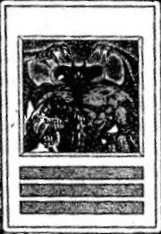 They summoned the following ka, during the game.

The majority of non-player characters were townspeople and soldiers.

People from the modern world who entered the game included:

Monster World was another tabletop role-playing game, which Dark Bakura used as a medium for a Shadow Game against Dark Yugi. Dark Bakura mentions that in many ways, it was a warm-up for the current game. As such, a number of events in the Shadow RPG mirrored events that happened in the Monster World game.