ZEXAL II (ゼアル Zearu Sekando) is an upgrade of the original ZEXAL in the Yu-Gi-Oh! ZEXAL anime.

The manga-original card "Number S0: Utopic ZEXAL" is based on this transformation. 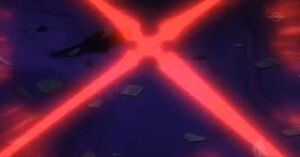 The X from Yu-Gi-Oh! ZEXAL logo is shown when the fusion commences.

Similar to the initial ZEXAL, Yuma and Astral are cloaked by an aura; Yuma with red mist and Astral with blue mist. They then come together, forming a red X from the Yu-Gi-Oh! ZEXAL logo as their souls combine into a new body. After commencing ZEXAL Morph, Yuma/Astral gains a black spandex-like suit with green designs resembling Astral's body markings and armor plating similar to "Number C39: Utopia Ray Victory".[1]

Back view of ZEXAL II

Yuma's hair grows longer towards his waist and turns orange but keeps the red forelocks, and gains a gold aura and eyes. Unlike the original ZEXAL (and Dark ZEXAL), Yuma no longer wears a Duel Gazer; instead, his left eye becomes more luminous, acting as the necessary mechanical component.[1] 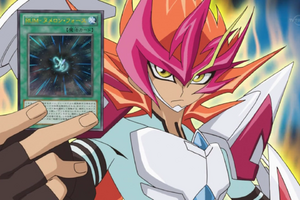 ZEXAL II grants Yuma and Astral the ability to use "Shining Evolution" (Japanese: リ・コントラクト・ユニバース Ri Kontorakuto Yunibāsu, Re-Contract Universe), which allows them to modify/evolve the card they have drawn and bring out its "true form". During their Duel against Vector, they transformed "Rank-Up-Magic Limited Barian's Force" into "Rank-Up-Magic Numeron Force", whose name alludes to the powers of the Numeron Code.[1]

During the Battle of Sargasso, after Astral and Yuma were defused from Dark ZEXAL and returned to normal, Astral stated his belief in hope and cooperation despite Yuma's previous "betrayal." Rekindling their bonds, the duo re-initiated ZEXAL Morph, evolving it into ZEXAL II. Yuma then utilized the "Shining Evolution" ability granted by the new ZEXAL to modify "Rank-Up-Magic Limited Barian's Force" into "Rank-Up-Magic Numeron Force" in order to defeat Vector. Due to the high-energy released during the Duel it causes "Sargasso the Different Dimension Battlefield" to collapse, ending Shark's and Kite's Duels with no result.[1] 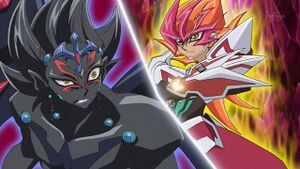 Later on, Yuma and Astral utilized this evolved form once more during their last rematch against Number 96. They activated the Spell Card "Xyz Treasure" to perform Shining Draw, drawing 3 cards and subsequently using both "ZW - Sleipnir Mail" and "ZW - Asura Strike" to increase the ATK of "Number C39: Utopia Ray" to 6000, while also allowing it to attack all of Number 96's monsters by the effect of "Asura Strike". Knowing the effect of "Number C96: Dark Storm", which dealt taken damage to both players, they used the effect of "Sleipner Mail" to make the ATK of "Utopia Ray" equal to that of "Dark Storm", which destroyed both monsters. Then, the effect of "Sleipnir Mail" activated, allowing ZEXAL II to Special Summon "Number 39: Utopia" from the Graveyard. They then used "Utopia" to attack Number 96 directly and win the Duel. After the Duel, Number 96 turned into a bolt of energy and surged towards ZEXAL II, forcing Astral to cancel the ZEXAL Morph and take the blow for Yuma, sacrificing himself to eliminate the menace of Number 96 once and for all.[2]

This power was later further evolved during Yuma's Duel against Mr. Heartland proving the bond between them to be stronger than ever before.[3]

During the final Duel against Don Thousand during the Barian Emperor Onslaught, this form was utilized once again. After using the first form of ZEXAL, Yuma and Astral ascended to ZEXAL II without separating, and proceeded to use it to draw three cards using a Shining Draw via "Xyz Treasure", including a "ZS - " monster. They later cancelled the transformation before taking the form of ZEXAL III.[4]

Later, ZEXAL was further evolved into ZEXAL III. However, the previous forms of ZEXAL are still accessible. During the final Duel against Don Thousand, all three were used in succession.[4] 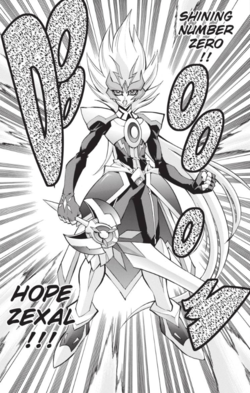 In the Yu-Gi-Oh! ZEXAL manga, there was one single instance in which a form of ZEXAL was utilized. During their final Duel against E'Rah, Yuma Tsukumo and Astral combined together to Xyz Summon themselves via Shining Xyz Evolution as the card "Number S0: Utopic ZEXAL" (０ ホープ・ゼアル Shainingu Nanbāzu Zero Hōpu Zearu, "Shining Numbers 0: Hope ZEXAL")[5]. The design of this upgrade is very similar to ZEXAL II's one, however in this form Yuma also wields a sword and has a "0" "Number" symbol on the chest. The effect of this card allowed them to prevent E'Rah from activating cards or effects when they Summoned themselves and to make their ATK equal to the total Ranks of all monsters used as Xyz Material for their Summon x 500. Thanks to this abilities, Yuma and Astral were able to attack and destroy "Dystopia the Despondant" and E'Rah themselves.