Shironosu, known as Sironos in the Tag Force series is a parody of Vellian Crowler.

His name comes from the Japanese word "shiro", meaning white, as in his face, as the opposite to "kuro", meaning black, appearing in "Kuronosu", the Japanese phonetics rendering of "Chronos", as in "Chronos de Medici", the original name of Vellian Crowler.

He appears as an unlockable opponent in some video games.

Shironosu was present at a preview of Yu-Gi-Oh! 3D Bonds Beyond Time.[1]

Sironos appears in the classroom after the player as completed the game with three of the seven originally available characters. He asks for the player's aid in his, Senjome and Sanzyudai Yuki's feud with Emperor.Umiuma and the rest of UmiumaCorp.

Sironos can appear in a special story event at the Obelisk Blue boys dorm, partnered with Mokuma, if either Alexis or Aster has been defeated in duels at least 15 times. After defeating them, both Sironos and Mokuma can be selected as tag partners.

Shironosu appears as a downloadable Ghost Duelist for February 2010.

Shironosu appears as a downloadable Ghost Duelist for September 2011.

In Yu-Gi-Oh! GX Tag Force, Sironos uses an "Alien" Deck. For the next two games, he uses Fairy Decks instead, using a large amount of monsters released in Enemy of Justice. 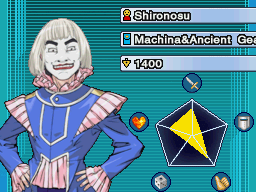 Shironosu, in Reverse of Arcadia.