From Yugipedia
(Redirected from Shizuka)
Jump to: navigation, search
"Shizuka" redirects here. For the card, see "Shizuka the Heavenly Dancer".

Serenity Wheeler, known as Shizuka Kawai in the Japanese version, is a character in the Yu-Gi-Oh! anime. She is Joey Wheeler's younger sister. The two were separated at a very young age when their parents got divorced. Serenity is depicted as being a sweet-natured, gentle, fragile and dependent young girl. She has a small fragile body, flowing auburn (brown/red) hair, and gentle dull greenish brown eyes. Throughout the whole series she is pictured as gentle but strong, with a never changing attitude of high spirits.

Shizuka is written with the kanji for "silence" and "fragrance". Serenity was chosen likely to the similarity to her Japanese name in meaning. 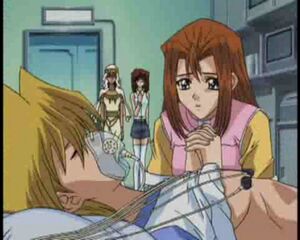 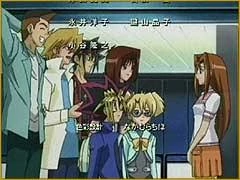 Serenity is seen briefly in the Waking the Dragons arc, when Joey calls her to say goodbye, as well as a montage narrated by Maximillion Pegasus just before the Battle Ritual, as Pegasus says that everyone whom Yugi and his friends met was destined to play a role in his journey.

Her Deck is composed of EARTH and LIGHT female monsters that she thought were cute. Serenity only Dueled once, in a three on one Duel with Tristan and Duke against Nezbitt during the Virtual Realm arc. Most of the cards in her Deck are from Labyrinth of Nightmare and Legacy of Darkness. In the Japanese version she mentions choosing cards that are cute (episode 106).