The historic first Shonen Jump Yu-Gi-Oh! TCG Championship Tournament Series at GenCon SoCal will be remembered for years to come. A total of 309 duelists went head to head in a 9-round, all day tournament that featured tried-and-true deck archetypes, a few new innovations, and first rate competition amongst some of the most talented duelists in the game. Whether they were local players or had traveled from a distance to attend, the participants in this inaugural tournament were all hoping to be the best. All eyes were focused on carrying away the monstrously attractive prize package, featuring the first ever distributed English language Cyber Stein trading card. In the end, it was John Umali’s Hybrid deck that walked away with the championship. He’ll take home the championship trophy, a laptop, and Cyber Stein, among other great prizes, and will always be remembered as the first champion. 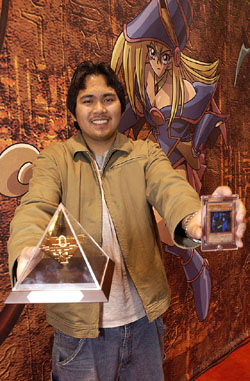