It’s over, and Monarchs have squeaked out another victory over the most varied Top 8 field yet!

Hooman Farahbakush played one of only two Monarch decks that made Day 2, and was forced to compete in a quarterfinals mirror match against Justin Trias. Overcoming his opponent, he then moved on to oust Richard Haynes, who was fresh off the win over his long-time friend Kirk Leonhardt. Haynes would be the first of two Creature Swap decks that Farahbakhsh would face today.

In the finals, he’d have his second such match, this time against a Shonen Jump Champion. Fili Luna was the fan favorite for the win from the get-go this weekend, and his undefeated streak in the Swiss rounds set discussions ablaze across the globe. Heading into Day 2, he was the definite smart-money choice for victory, and after winning the first duel of the finals Luna seemed to have it in the bag. But Farahbakush fought his way back, battling through two grueling matches to chalk up another victory for Thestalos and Zaborg!

The fifteen year-old Team Magnum duelist hails from Las Vegas, and his win here is yet another finals upset, a trend that could definitely be termed a consistent pattern in this format. Our congratulations go out to all competitors in the Shonen Jump Championship this weekend, but a special congrats goes out to Hooman Farahbakush, your newest Shonen Jump Champion! 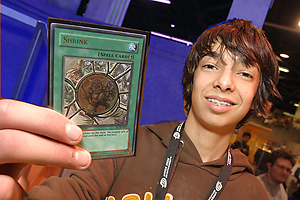