Against all odds, David Rodriguez has captured the Shonen Jump Champion title!

We’ve all gotten used to it by now: one token Cyber-Stein OTK makes Top 8 and then usually scrubs out in the quarterfinals, and that seemed to be the path Rodriguez was on this morning, when he got paired against Geoffrey Fisicaro. It’s hard to imagine a worse matchup for Cyber-Stein: Fisicaro was playing Chain Strike Burn, a deck that is virtually an auto-win against a dedicated Stein player. Somehow, Rodriguez managed to pull out a 2-1 victory without ever even using Cyber-Stein. Wow.

From there he played off against Gerard Ramirez, whom he beat 2-0-1 — that’s two wins and a draw thanks to Ring of Destruction! Rodriguez then went on to the finals where he was paired off against teammate Mario Matheu.

Since both duelists were from Comic Odyssey and were going to share the prizes anyway, the finals were being played for just one thing: honor. While both finalists consider themselves co-champions, the official victor is Rodriguez, who managed to score an entire match win in just three turns. Ring of Destruction in his opponent’s end phase got him Cyber-Stein for a turn 2 victory in game 1, and fate dealt him the perfect hand of Giant Trunade, Cyber-Stein, Megamorph, and United We Stand for the second duel. The reign of Monarchs is officially over!

Our congratulations go out to David Rodriguez, your newest Shonen Jump Champion! 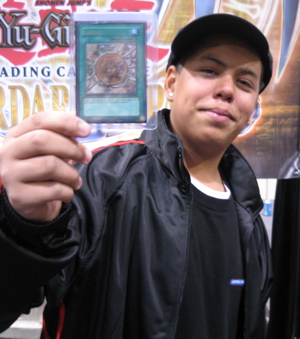